My Quick Escape To The Island of Bazaruto

It’s mid-winter in Johannesburg, South Africa. It’s cold, the media is full of  bad news and I can think of nothing better than a quick escape to the beautiful island of Bazaruto in Mozambique.


And it really was quick. Just over two hours.  The flight from OR Tambo International airport on Airlink, direct into Vilanculos was much easier than I thought.  After arriving at the airport I was taken, along with a party of other guests,  to a jetty nearby.  June is considered low season, but temperatures are still fairly warm. Today at 24 degrees centigrade I had to quickly start stripping off the layers of city clothing. 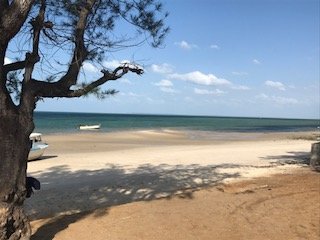 An Untouched Island In Africa

And while I haven’t been to this region for some years,  just staring out at the bay reminded how beautiful and untouched this part of  Africa still is. The water is beautifully blue and the pure fresh sea air has an immediate effect of lifting my spirit.

I hopped on the boat, which is chartered by the Anantara Bazaruto Island Resort and Spa, and my ultimate destination on the island of Bazaruto.

The Bazaruto Archipelago is renowned as one of the world’s top snorkeling, diving and fishing destinations; it boasts year round warm waters, dazzling soft coral ridges and thousands of tropical fish species.  And The Anantara Spa was crowned Mozambique’s Best Resort Spa 2016 in the World Spa Awards. Can’t wait! 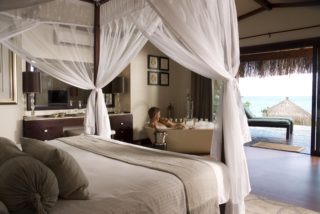 Despite it’s size, there are around 3500 locals living on the island, along with one of the largest populations of the endangered and very elusive Dugongs who hide out in the waters of Mozambique.

After forty five minutes of ocean going, we arrived at the beautiful Anantara Bazaruto Resort and Spa. Guests also have the option of taking a helicopter ride to the destination which is a little quicker, but obviously more expensive.  However, as I have good sea legs and actually really like boats, it’s an easy choice for me. And anyway the trip was very calm and pleasant on the cobalt blue Indian ocean.

As the boat pulled up to the sandy shore,  all guests were met in the truly friendly African tradition of song and dance.  Well as for me, nothing beats that feeling of complete happiness of putting my toes into the warm Indian ocean again. 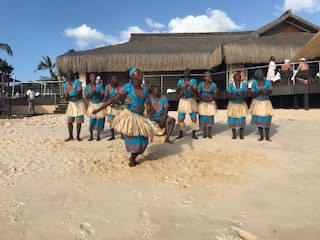 How To Get There

Connectivity: Through the Airlink alliance with SAA travelers connect conveniently with SAA, their Partner airlines and other carriers throughout Southern Africa and the world.

Little Italy On The East African Coast Of Kenya

Sunrise Yoga On The Beach At SALT

My Quick Escape To The Island of Bazaruto