Sometimes in Boston, and in other Bikram Yoga studios around the world, they’ll turn up the heat to 105 degrees and get the humidity going and tell you it’s a furnace. But it’s only a furnace for ninety minutes and it’s a furnace you get to decide what days you want to go to and then you get to go out of it.

For those that do the work, though, the changes come. We used to call it the Bikram Burn, where the pounds dropped and the muscles appeared and you actually would gain weight, which meant we just stopped weighing ourselves. You were burning away the fat and letting the muscle that was there rise up. 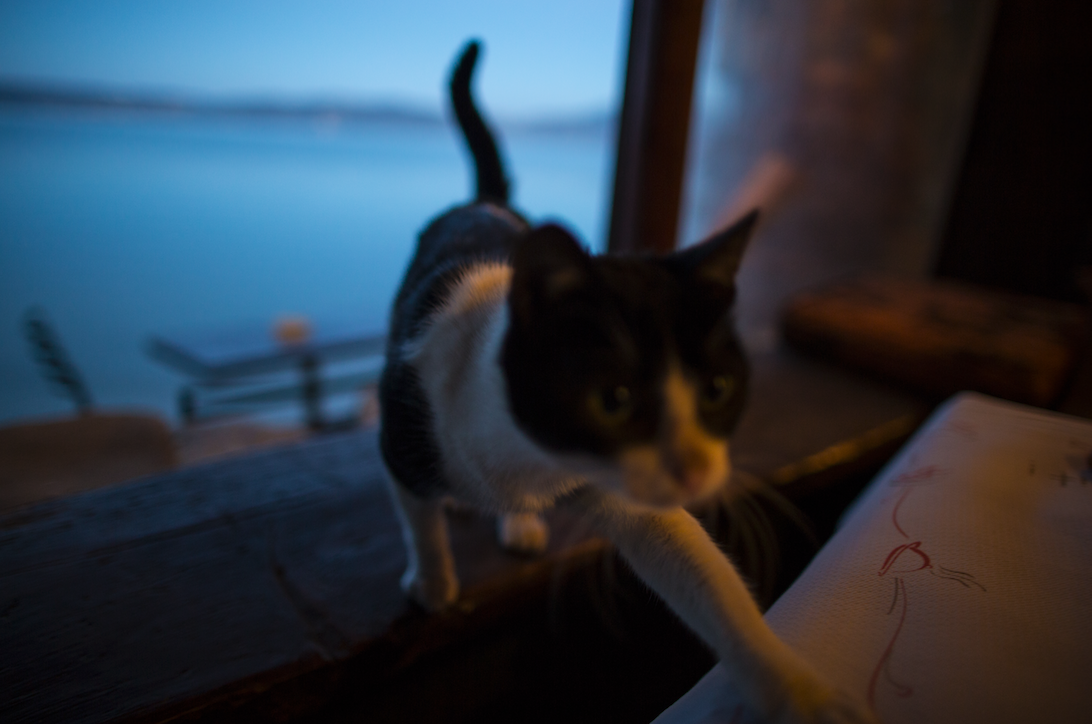 Big Dog made it through that furnace, and he got stronger and lost some weight but then Big Dog made it here, and on cold winter Greek nights, the furnace burned fierce.

There is an expression that God will only give you what you can handle and God gave Dino plenty and he put it all on this back and climbed that fucking cliff with kids on his back and then he climbed it again and then when it was 10:30 in the morning and he and Thanassis were headed for a cup of coffee in town and another boat hit the beach, they took care of them too.

He then went and did yoga and cried in his small single room because at least then it’s getting out and the images don’t linger and he stared at himself in the studio on the days that no one showed up for yoga.

The furnace here burned away Constantine and Big Dog and anything that had to do with America and softness and flab and ex-girlfriends and a game he loved that he could no longer play. It burned away when he carried 50 gallon tubs of rice and handed out spoons. It burned the layers of fat and his past off of him one refugee at a time. Most of the NGOs have left the rescue mission now – a ton of them have gone home with their pictures and their fundraising pitches. Dino’s here, Thanassis too. They aren’t going to leave till they know no other boats will ever come ever – not even one. They can’t. 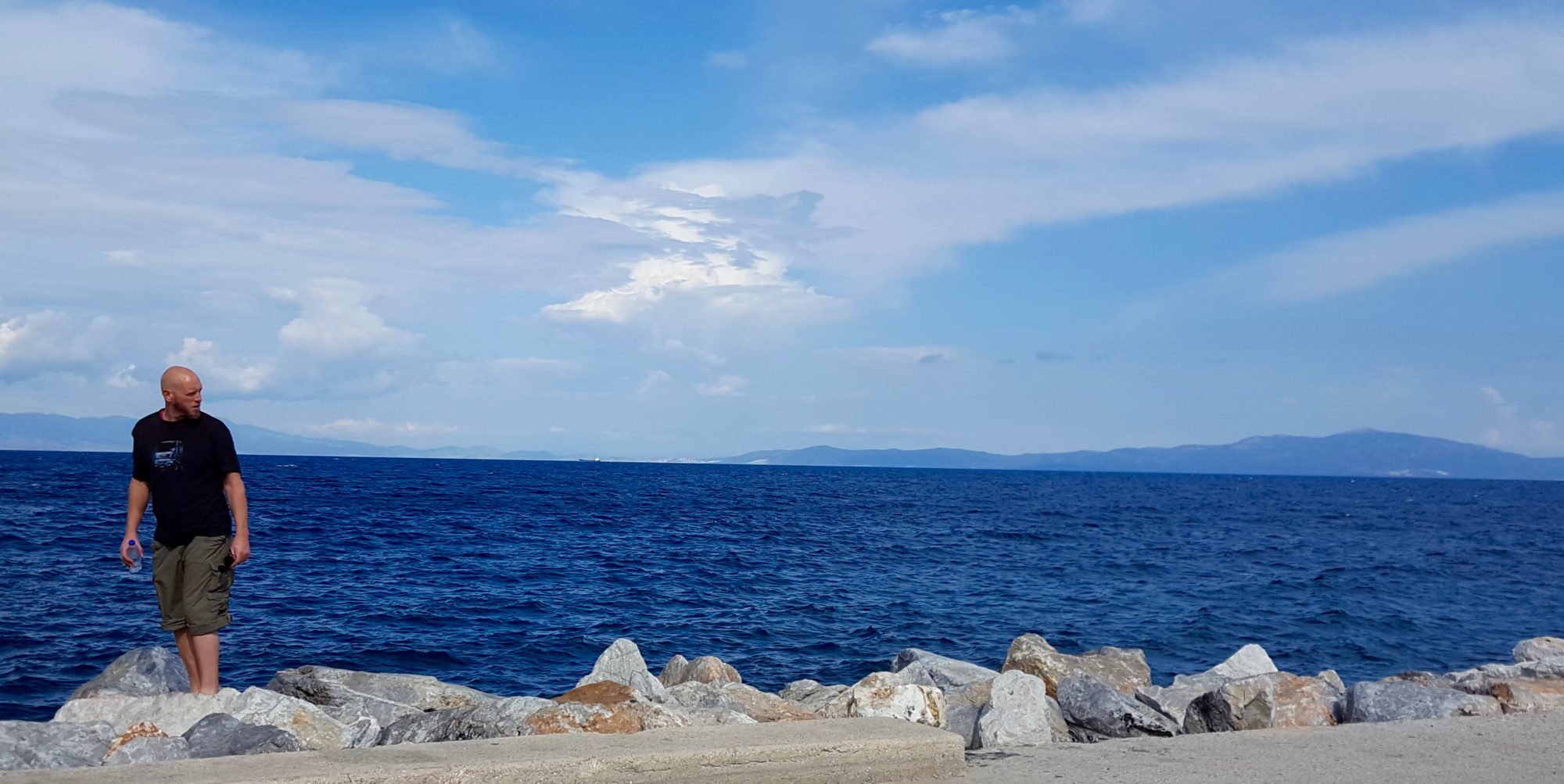 When Dino’s walking the beaches now, looking at Turkey, you see a man divided. You know he wants the kids to be safe, and for the refugees to be able to turn around and go home. But you also know that part of him wants to hear the engine of the boats, wants to pull new children into his arms, wants to take old engines off the boats again. He found something in those nights – maybe what he was always hunting for. What he found gave him a purpose above and beyond anything that he had run into before. Then it was gone.

He needs it even more than he did then but he knows, I think, the boats may never come again and most certainly it will never be like it was in the early days he had here. There was a moment, a place, a need and Dino answered the call. That’s all you can do.

Dino left me at Pipka a few hours before my flight back to Athens on my last day on Lesvos– he was catching a ride back into town to do a few things and then teach his 4:00 class. A couple of people are coming and that’s all he needs. Teachers teach, coaches coach and that’s all he wants to do.

I see Saba as she comes out of her cabin.

“Are you going to class today Saba?” I ask her.

“Yes, I am. They are taking me down in the van in a little bit.”

“So you are really liking yoga, that’s great and Dino, he loves teaching you.”

Saba thinks a minute. I see her journey on her.

I see it all – the President taking her land, the plane flights, the walking, the boat ride and the $100 life preserver, the rocky shore and then her cabin here.

“I love yoga James and I am very sure of one thing.”

“Dino is the best yoga teacher in the world.”

“Hello!!!!” The young boy twists and turns on Dino’s shoulders as he happily piggy backs around Pipka.

“He is from Syria. He is nine or ten years old. His mother is here.”

“What’s your name?” Dino prompts him – he pulls his feet and leads him into it.

“my name is –“ the light goes on and the boy understands his cue – he says laughing:

This story was written by James Cannon Boyce, who has contributed to Longevity before. Keep an eye out for part 2 in the “Walking with Dino” series.

Walking The Earth is a creative expedition designed to shine a light on people worth supporting and places worth saving. As we journey the world, we also share our authentic travel experiences and recommendations. Dino is still living in Lesvos, still teaching yoga and his studio is going well.
If you want to learn more about the camp that Dino volunteers with, click here.
Tags:Walking The Earth

I have been involved in many things online, from The Huffington Post, (RED) and Newsladder which was a really great idea that didn't work and I still miss it. For Longevity, I write, edit and help out. I also wrote a book, www.floatingwithmyfather.com