Exercise consumed Demi Moore’s life. Many others are starting to share concerns about this too. Exercising also consumes many others and is getting worse with so much fit sport freely available. New conditions like body dysmorphia and exercise addiction are quickly becoming problematic.

Demi Moore just opened up about her issues battling extremely restrictive eating and exercise addiction in her new memoir, ‘Inside Out.’ Demi spent a long time battling an unhealthy obsession with exercise and disordered eating. I think that exercising consumed a large portion of people over the years and is continuing to do so to extreme levels. No mental health problem is simple to handle or admit to. However, what makes this one worse is the fact that it appears to be ‘healthy.’

It’s not like you’re anorexically skinny or very overweight right? Sometimes, it doesn’t have to that extreme to be detrimental to your quality of life.

Unfortunately, this is a reality we need to face because too many women and men are suffering from this disorder. Sometimes the symptoms are debilitating and prevent people from getting through their normal tasks. One look in the mirror can ruin an entire day.

When you look at Demi Moore now, you see a vision of perfection. She’s aged 56 and looks absolutely beautiful. Moreover, Demi is hugely successful and confident. However, just like any normal human being, she’s had to cope with some emotional and mental problems over the years.

In her recent cover story interview with Lena Dunham for Harper’s Bazaar, Demi explains a far-from-idyllic upbringing. In addition, she states that there were some very rocky times during her adult life. Most of which were riddled with addiction, loss, and pressure from the public. Exercising consumed her for a long period of that time too. It’s not all bad, though, because she says the experiences ultimately, helped shape her into the woman and parent she is today. 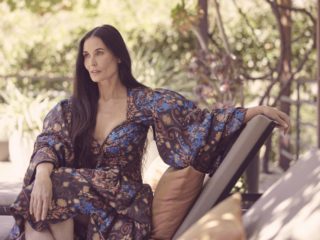 Demi explains that her obsession with working out was one of the worst. The addiction started when she had to train for the movie A Few Good Men, in which she played a naval lawyer. Demi said she had also just given birth to Scout, who is now 28-years-old. It was her second daughter with her ex-husband Bruce Willis. She says that having the child pushed her to lose the baby weight.

Demi explains in her book that she didn’t feel like she could stop exercising. Exercising consumed her entire life. She convinced herself that it was her job to fit into the outfit. This was an unforgiving military uniform she had to wear in two months in A Few Good Men. The pressure to get in shape for that movie ignited the obsession to work out constantly. Exercising consumed her for the next five years after this movie was filmed.

Your Happiness Is More Important

Exercising consumed Demi’s life and as a result, made her very unhappy. This is happening to many others too. Whether you’re working hard at the gym, your happiness, and mental health matter the most.

In addition, exercising consumed Demi’s ability to breastfeed her baby girl. She explains in her book that excessive exercise meant that there was not enough fat in her breast milk, and Scout was not growing the way she should. Therefore, Demi’s doctor told her to supplement Scout’s milk with formula. As much as she was upset by this, she said exercising consumed her still. You guessed it, she kept working out. 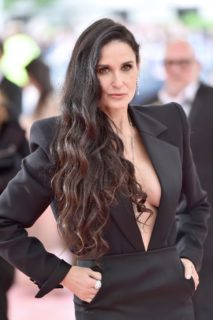 According to People, the mom of three went from filming 1992’s A Few Good Men to her next movie, Indecent Proposal. Once again Demi pushed the limits of weight loss. She explained that she had to be on display again, and all she could think about was her body, her body, her body.

So after already having an over-the-top exercise routine, she then doubled it. In addition, Demi cut out carbs, ran, cycled and worked out on every machine imaginable. Her body was so exhausted that she ended up contracting walking pneumonia. She did have to temporarily ease up on her workouts. However, her restrictive habits started again when she began filming 1996’s Striptease.

The thought of having the perfect body was so strong that it had kicked her mind into overdrive. Exercising consumed Demi’s every choice and we are worried that this is happening to more people than you’d think. They count every calorie and never allow for time to rest.

Demi says when she was making Striptease, she would measure out half a cup of oatmeal and prepare it with water for breakfast. Then for the rest of the day, she would have only protein and some vegetables. That was all. Demi says all this obsessing about her body does sound crazy and you’re not wrong. Eating disorders are crazy because they are a sickness. However, just because they sound crazy does not make them any less real and we need to speak out about them more.

The weird thing about eating disorders is that you’re somewhat aware of the issue. Even though you know it’s wrong you can’t help but fall back into the same pattern. We believe the more open people are about it, the more comfortable they will feel, to seek help.

Exercising consumed Demi, but it wasn’t until the making of G.I. Jane a year later that she realized something had to change. She explains that the ‘bulking up’ for the role of naval officer helped her break free from her disorder. She said she was 138 lbs and at the end of the movie, she was above her usual weight, but couldn’t face another diet. 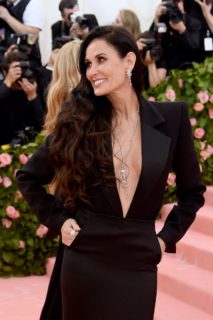 Demi says her usual reaction would have been to start starving herself again. She would start another exercise focused on cutting fat and getting lean.  But something clicked inside. She said she’s reached her limit.

When Demi got home to Idaho, she had an epiphany in the shower one day: ‘I just need to be my natural size.’

Your body is clever and it knows when it’s had enough. You can only punish or restrict it from what it needs for so long. Moore says she started to meditate on her body image problems.  She says she added into her daily prayer a new mantra. She started telling herself that she has the courage to be seen without padding or protection.

Despite everything, she couldn’t go on fighting her body and her weight. She had to make peace. As a result, Demi also stopped hard exercise for four years straight! She said she didn’t go back to the gym, especially the one in her house. In fact, Demi converted the space into her new office.

Dancing is any kind of movement that makes your body feel good, rhythmically. Studies have found that when you dance, a naturally lean physique is not all you’ll achieve. Here’s why moving more will boost your brain, your mental health and make you feel good.