What if you could reduce the amount of sugar you need to bake a batch of deliciously moist brownies – by 40% no less – and your end product wouldn’t taste any less sweet?

While this may sound far-fetched, it is now a reality. In the past, various companies and their respective scientists have invested untracked time, money, energy and research into trying to replace traditional sugar with alternatives such as stevia and xylitol (which many feel have a strange aftertaste). Few, if any, of these replacements have been able to make a change on a large scale, and global health issues such as sugar addiction, obesity and diabetes keep raging on.

According to Quarts News, however, now a relatively small Israeli startup has come up with a way to reduce up to 40% of the sugar content in various food products, all the while maintaining the same taste. DouxMatok – the name of which combines the French word ‘doux’ with the Hebrew word ‘matok’ both meaning ‘sweet’ – was founded in 2014 by a father-son duo and tapped into 75 years of sugar chemistry to create a product that could address the ongoing health struggle with sugar.

How it this different from sugar alternatives? 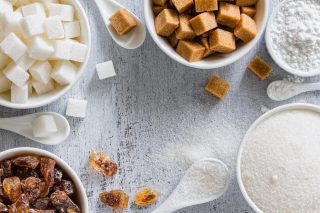 The technology used to make DouxMatok isn’t geared to develop a replacement for sugar, and neither it isn’t high-potency sweetener. In this sense, it is unique from other products with the aim of sugar reduction. What you get is still sugary, still sweet, still high in calories and still nutritionally empty. However, you would need a lot less of it to get exactly the same results as required by traditional sugar. Especially when it comes to large-scale manufacture of sugar-laden foods, this technology could be used to help to fight the abovementioned health issues.

How does it work?

First we need to understand how sugar operates in your mouth and digestive system. In your regular piece of chocolate cake, for example, most of the sugar it contains misses the taste buds and heads to the stomach. In other words, the person having the cake does not actually taste all of the sugar, but it still results in all the negative health effects. According to Quarts News, the technology used in DouxMatok takes advantage of loading sugar molecules on a mineral carrier, thereby resulting in a more efficient delivery and improved sugar perception. In this case, the chosen mineral carrier was silica and other tasteless mineral carriers, which occurs naturally in fruits and vegetables and its passage through the body is harmless. By taking small particles of this mineral and coating their surface with sugar molecules, the scientists were able to target those molecules directly to the taste buds responsible for sensing sugar. In doing so, the good old sugary taste remains longer on the tongue, without the normal sugar bulk reaching your stomach and leading to spiked blood sugar levels.

Moreover, The Times reports that DouxMatok recently announced their partnership with Südzucker, a leading German sugar company and Europe’s biggest producer of sugar. By doing so, the DouxMatok technology can be taken to the world’s largest markets, where sugar is most widely used, especially in products such as baked foods, sweets and cereals.

“Providing people with indulgences at decent nutritional value, it can’t really be done in a boutique operation. You want to go across territories, across cultural attitudes,” says Eran Baniel, CEO and cofounder of DouxMatok. According to Quartz News, the products are expected to roll out first in Germany before spreading across the wider continent.

Speaking to AgFunderNews, Baniel said that a comparable US partner will be along shortly and announced later in 2018. “We said ‘If you want to buy our sugar, tell us who your sugar guys are and then take us to them.’ That’s how we got to know Südzucker and got to meet our US partners. It couldn’t have been better. It’s the demand that took the technology to the supply,” he said.

Where could this product be applied?

As yet, the product is considered suitabe for foods that contain large amounts of sugar, such as cookies, candies, chocolate, sugary spreads and snack bars. It cannot yet be applied to soft drinks or juices.

It seems as though it will take some practice to perfect baking and cooking with it, while is is also needed to add other ingredients because of the bulk that is now lost. This could, however, be made useful, since it usually leads to more dietary fibre being added to the end product. Südzucker said that the product should be on the market around this time next year.

Want to find out more?

Click here to discover the health benefits of oat milk – and how you can incorporate it into your own life.