WASHINGTON – On 14th December 2016 the Environmental Working Group and Women’s Voices for the Earth filed a lawsuit against the Food and Drug Administration (FDA) in the United States. The basis for the lawsuit is the FDA’s failure to protect the public from dangers associated with popular hair straightening treatments containing formaldehyde.

In the lawsuit, filed in the U.S. District Court for the District of Columbia. The groups charge that the FDA has failed to adequately respond to the concerns raised about the health risks salon keratin hair products containing formaldehyde pose.

“For years stylists have reported that the application of these hair treatments caused difficulty breathing, eye irritation and nosebleeds,” says Tina Sigurdson, EWG assistant general counsel. “The FDA is aware of the health hazards associated with the products since at least 2008. Despite these dangers, the FDA has yet to take action to remove them from the market”.

Though high levels of formaldehyde, are a potent allergen and human carcinogen. They still are part of many keratin hair straightening treatment. And cause a serious health threat to both clients and salon workers.

Formaldehyde is a chemical that is used as a preservative, an embalming agent and a disinfectant. However, formaldehyde can also modify our hair proteins, called keratins. Causing the hair to return to its original, smooth, healthy state.

Some of the other chemicals that can cause health issues are:

These treatments involve liquids applied to hair in the salon. They are then heated using blow dryers and straightening irons. The high temperatures of these hair styling tools cause the release of formaldehyde from the liquids to go into the air.

Some of the acute side effects include: nosebleeds, burning eyes and throat, skin irritations and asthma attacks. However, these chemicals can also lead to long-term health issues. Including nasopharyngeal cancer and leukemia. 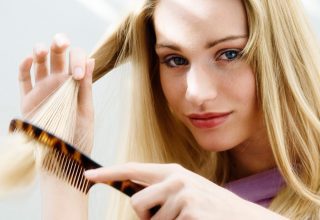 In 2011, EWG filed a formal request, for the agency to investigate the products and then take appropriate action. However, after five years, the FDA has not issued a final response to that letter. Nor, have they taken any significant action against makers of the products.

“The health risks posed by these products deserved immediate action from the FDA. When it was brought to their attention in 2008,” says Alexandra Scranton, director of science and research for Women’s Voices for the Earth”. Allowing salon workers and their customers to continue to be harmed by these products for over six years is unconscionable”.

However, the Occupational Safety and Health Administration can now issue citations to salons where the procedure is offered if formaldehyde released into the air exceeds permissible limits. Even the cosmetics industry’s own safety review panel declared hair straightening treatments containing formaldehyde unsafe. Yet the FDA has limited its public action to generating an informational web page. And issuing warning letters to two manufacturers.

As a result, Brazilian Blowout and similar products remain on the market. Continuing to injure both consumers and salon workers.

“My health was impacted by formaldehyde in hair straighteners to the point where I, now, am no longer able to work in a salon environment since I have no control over the products used by other stylists,” said salon worker Dawn Marino., N.J. “The FDA needs to take action to remove or restrict these dangerous products to help protect stylists. Professional stylists shouldn’t have to choose between their job and their health.”

Other states and nations, including California, Oregon, Canada, France and Ireland, have taken action against products such as Brazilian Blowout by removing products with dangerous levels of formaldehyde from the shelves.

The suit filed today argues that the FDA has failed its duty by unreasonably delaying its response. It asks the court to order FDA action by setting and enforcing a deadline for the agency to investigate and respond to the petition.

The groups hope a court order will motivate the agency to finally protect salon workers and the public from these dangerous products.

The Environmental Working Group is a nonprofit, nonpartisan organisation dedicated to protecting human health and the environment. Its mission is to empower people to live healthier lives in a healthier environment. Learn more at: www.ewg.org

Women’s Voices for the Earth is a national environmental health organisation that works to amplify women’s voices to eliminate toxic chemicals that harm our health and communities. Learn more at: womensvoices.org

Longevity will be following this story as it unfolds. It’s critical consumers and salon workers around the world are fully informed and protected from the risk that these treatments place them under. Unfortunately, there is still too little awareness and protection to mitigate the real health risks associated with hair straightening treatments that contain formaldehyde.

So, while many may think that beauty and profit should supersede the potential health risk,  the evidence is compelling enough to suggest stronger action is necessary to protect both salon workers and consumers.

Seafood Fraud: Why There’s Something Fishy About Your Next Meal

CBD Edibles: Are There Health Benefits In Eating Cannabis?