Star of the romantic film The Age of Adeline, the beautiful Blake Lively has never struggled to stay slim. Agreeing to shoot the surf thriller The Shallows ten months after giving birth, Lively had to make a plan to get her body into a surfing fit state. Diet and exercise were the key.

Blake Lively has always enjoyed staying active. Throughout her pregnancy she practiced and took long walks But just eight months after giving birth Lively used diet and extreme training to transform from a new mama into a super-toned athlete.

In her interview on the Kyle and Jackie O show, Lively shared her film prep diet secret, “I did no gluten and no soy, which seems like oh that’s really easy to cut out, but you realize there is soy in everything. You realize you are eating no processed foods. So that’s basically what I did, no processed foods and working out. You just have a balance of protein carbs and vegetables.”

Lively told Extra TV that she spent a lot of time,  “Making my own food often. It was kind of close to Paleo and it was nice to eat clean like that.” But diet wasn’t the only thing Lively needed to change.

The 28-year-old actress told the Daily Mail, “I was ready to get back in shape, but I’ve never been in that good of shape in my whole life.”

“It was incredibly physically demanding. You think as an actor taking on an isolation film, a survivor film, you are taking on the emotional demand,” Lively told Extra TV. “But having to take on a movie where I had to do my own stunts for six of the eight weeks. It’s like being an athlete more than an actor. I trained leading up to it with this amazing trainer in New York, Don Saladino who kicked my butt, got me into shape. It was eight months after I had a baby too, so it was just such an undertaking. That was tough because your body changes so much.” 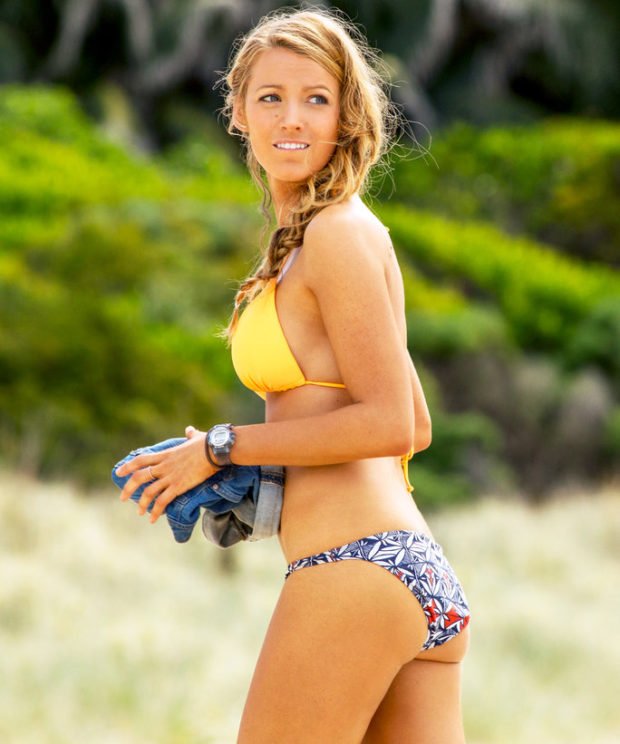 Lively’s trainer, Don Saladino, told PEOPLE how he got Lively in shape for the beachside shoot in just two months. To supplements her almost daily workouts, Lively was eating four small meals a day – which she planned with the consultation of a nutritionist.

“We made sure that her meals were well-balanced,” he said. “She had a protein, a vegetable and a slow-burning carb. We tried to give her enough so that she wasn’t stuffed, but she was comfortable.”

Of course, that “slow-burning carb” was gluten-free – usually sweet potatoes, gluten-free oatmeal and white rice. “This is not training a fitness competitor or a model,” Saladino said. “This is about feeding a woman who’s got a child who’s got to have certain nutrients in her body. She’s got to take care of herself. She’s got to eat healthy. The way that we did it was the right way, and it wasn’t through starving her.”

Acording to Popsugar Lively also loves a green juice made of, kale, chard, apple, beet, parsley, pineapple, mint, lemon. Even though her secret love is chocolate and cake.

Just a year and a half later Lively is pregnant with her second child and is feeling excited about the arrival of her new family member.

Has Everything We’ve Been Taught About Aging Wrong?