Cooking Feels Like A Chore Tonight. Not If It’s Greek

Cooking feels like a major chore at night after all the craziness you’ve encountered that day. Instead of ordering in, why not eat a healthy Mediterranean-style dinner, on that’s simple. Just like the Greeks do.  I did this last night. I was inspired by the memory of the delicious aromas from my favorite Greek restaurant.

At first, I was thought it would be too complicated to replicate a Greek dinner. Fortunately, it’s the opposite and the Greek way of cooking is all about simplicity paired with taste.

The Greek cuisine is a healthful meal choice. But, with any cuisine or restaurant, there are a selection of healthy choices and less-than-healthy choices on the menu. Watch out for the not-so-good-for-you options and pick tasty, but beneficial items instead. For example, Greek classics like gyros, spanakopita, dolmadakia, and fried squid are often packed with sodium and fat.

Luckily, I have listed the healthy reasons that explain why you should choose Greek for dinner tonight!

Besides being pretty easy to prepare and super delicious. It is always fun to experiment with different cuisines to switch things up in your diet. It’s quite easy to slip into following the same mundane routine and eating more or less the same kind of meal day in and day out. How boring! 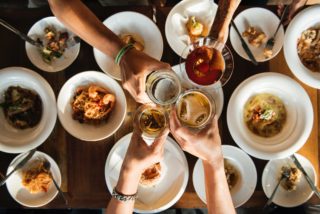 And it’s not going to benefit you in any kind of way ordering take out either. That’s why I am sharing with you this life hack. Go Greek on those nights you’re just not in the mood to cook. Preparing the meal is enjoyable and if you were in a bad mood previously, you will feel a whole lot happier afterwards. Mainly because Greek food tastes so amazing and knowing you cooked it yourself is highly satisfying!

What I like is that you can control what you choose to serve and nibble at. If you aim is to get more fuel and up your calories then you can choose side dishes that are energy dense, or choose lower energy foods. Greek food is very versatile.

There are quite a few variations amongst the Mediterranean diet depending on which part of it you’re inspired by. However, with all Greek food, their meals rely heavily on the tiny olive and its rich oil. The Kalamata olive, named after the town it is from, is the large, meaty black olive.

I love these olives and are most famous for their appearance in the worldwide favorite, the ”Greek salad. All olives can be high in sodium which is why you cannot go and eat an entire jar at once. Obviously. But, in moderation, they’re a fruit that is rich in oleic acid that is a monounsaturated fat which might help to lower cholesterol.

Serve these tasty little fruits as part of your platter and reap the health benefits!

Last night, I had some small whole-wheat Pitas in my freezer. It couldn’t have worked out better since I was just in the mood for Greek food. 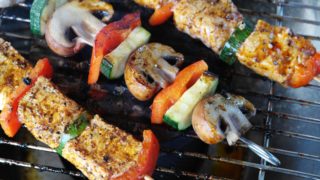 What’s most important to me though, is keeping my meals clean and healthy. Sometimes the restaurants are too generous with the oil, so it’s cheaper and healthier to do it yourself.

If you can opt for whole-wheat or whole-grain Pita bread because it is low-G.I. and a slow releasing carbohydrate. You’ll also pack in more fibre, iron, and protein than unenriched white Pita bread. White flour options are highly processed, refined and filled with a lot of sugar.

Cooking feels even better now right? The Greek cuisine bakes the Pita until it’s golden brown and crisp. Then all you need to do is fill up the air pocket in the middle, with veggies, scoops of hummus, tabbouleh, or feta cheese. Pita bread is also relatively low in fat but must be eaten in moderation. One pocket can contain about 170 calories and about 14% of your recommended daily sodium limit.

Did you know that Goat’s milk is the main ingredient of feta cheese? Either way, feta is my ultimate favorite cheese to have with salads. The creamy, savory cheese is the best for crumbling into any Greek dish. A serving of feta cheese adds its flavour for fewer calories and grams of fat. It also contains less cholesterol, than a comparable amount of cheddar cheese.

Besides, most of us keep a jar of feta in our fridges at home!

4. Salata Is The Game Changer 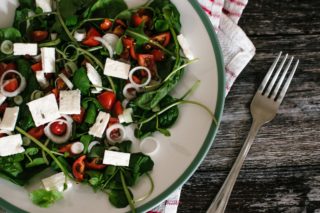 No matter what diet you follow, a salad on most menus is considered a healthy option. But in the case of a Greek cuisine, one of the most popular dishes on any Greek restaurant menu is the ‘Greek salad.’ I think it’s mainly because it’s one of the simplest, tastiest and easiest salads you can get. You can quickly make one yourself and serve it as a side dish which gives your meal more volume making it more satisfying.

Generally, the salad consists of a bed of fresh tomatoes, cucumber, onions, olives, feta cheese, olive oil, and a dash of oregano. You can make that no problem! Cooking feels better.

I don’t mean a big bowl of plain Greek yogurt. That would be a little ridiculous, although you are welcome to do that if you feel like it.

I am talking about Greek tzatziki sauce and it is so easy to prepare yourself. The sauce combines the slightly sour flavor of plain yogurt with the fresh, juicy crunch of cucumber, along with some crushed garlic, herbs and a drizzle of olive oil. And as with any yogurt, you’ll get good helpings of calcium and protein.

6. Bring On The Mixed Herbs

It is believed that the secret to all Greek food is its proper use of herbs and spices. Incorporating herbs and spices into your meals brings antioxidants, vitamins and minerals to the plate. Cooking feeks like fun because you can get creative with your herbs and spices left in the kitchen! 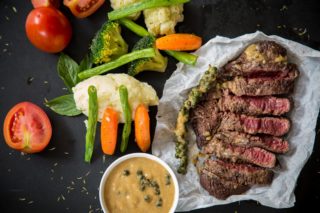 Greek dishes are filled with a variety of aromatic herbs, including oregano (rigani), rosemary (dendrolivano), thyme (thymari), sage (faskomilo), and mint (diosmos). They’re also abundant in garlic cloves (garifalo), cumin, sesame seeds, and cinnamon. You can add these herbs and spice to loaves of bread, sweets, sauces, and meats.

The word symposium actually comes from the Greek tradition of gathering together to enjoy a convivial meeting for drinking, music, and intellectual discussion.

So, the bonus here is that you can enjoy your simple Greek meal with your family because everybody can just help themselves.

Therefore going Greek for a night is not only delicious and healthy, but a wonderful opportunity to relax, slow down and make conversation with good company. The thought of cooking feels much easier now!

Benjamin Franklin himself says in his autobiography that his daily routine meant waking up at 5 am and going to bed by 10 pm. Wake up earlier. Here’s why.

Transform Taste And Quality Of Your Food Preparation With These Tips

Cooking Feels Like A Chore Tonight. Not If It’s Greek