Eating disorders in children are rapidly becoming more and more of a modern issue, with children barely out of preschool reportedly starting to suffer from them. In Australian hospitals, for example, statistics for eating disorders show that there has been an increase in admissions in children under the age of 12 over the last eighteen years. Additionally, with the ever-increasing content of body ideals on cover pages, social media and advertisements, there is a lot of pressure on children to look a certain way and to fit into certain clothing sizes.

Marilyn Davis-Shulman, a clinical psychologist, explains that, in addition to media, there are a plethora of other factors that can have an influence on how a child will eventually think about food. Parents have an enormous influence on their children, both good and bad. Significant factors include the emotional atmosphere created in the home, stress, anxiety, emotional unavailability from the parents and phone usage during meal times.

How does someone develop an eating disorder?

“Causes of eating disorders may be biological, social and psychological,” Davis-Shulman says. “These disorders are multifaceted and very complex. Certain personality traits are also strongly associated with eating disorders (anorexia) such as perfectionism, obsessiveness and a need to be in control.”

If children develop an eating disorder at a young age, they are learning behavioural patterns, which render them vulnerable to other influences and make them susceptible to making decisions and choices that are not in their best interests.

“It should be noted that eating disorders are not inherently about the food,” she explains. “Instead, the underlying psychological factors that fuel an eating disorder are far more complex than a child being ‘a fussy eater’. Some kids may be picky eaters, and that’s okay. It is how the parents deal with the child’s behaviour that matters.”

There is a big difference between a child having an eating disorder and a child that is fussy or picky when it comes to eating, or eating difficulties that are linked to other issues such as Autism Spectrum Disorder.

Where do the parents come in?

Rosanne Lombard, a registered dietician at Nutritional Solutions, agrees that the example parents set for their children when it comes to food, is extremely important.

“Children easily pick up on what their parents are eating, drinking and the way in which they view their bodies.”

The long-term impact of an eating disorder in children

“Unfortunately, children do not understand the impact of an eating disorder,” says Lombard. “Right now, they are trying to deal with something in their lives (it may be physical/sexual abuse, a family crisis, divorce or a big move to a different country), and this is their coping mechanism. They are only seeing the short-term effects of an eating disorder and have no idea about the long-term consequences.”

Due to the eating disorder, there may be several deficiencies that a child may be experiencing, as well as the psychological aspects of an eating disorder. Eating disorders can lead to nutrient deficiencies; zinc, calcium, iron, protein and fat. These can easily influence the growth and development of the individual in the following ways:

“For this reason, it is critical that a multidisciplinary team consisting of a medical doctor, a psychologist/therapist, a psychiatrist, a registered dietitian and a physiotherapist treats a child with an eating disorder,” says Lombard.

How important is a parent’s own self-esteem and body image when it comes to how a child will eventually view his or her body?

“Very often eating disorders or poor body image/self-esteem has a genetic influence,” Lombard says. “If a mother has suffered from an eating disorder previously/currently or is constantly concerned about her appearance and what she is eating, her child could easily pick up on this. Again, children model what their parents are doing, especially young girls wanting to do what their mothers do and look like their mothers. If a mother is constantly saying how “fat” or “ugly” she looks, a daughter will start to mimic this behaviour and start to ask questions; “Does this make me look fat?” – when they shouldn’t even be concerned about that.”

Setting a good example, having a healthy relationship with food and creating a positive body image can certainly help to reduce the risk of eating disorders being passed on to a child.

What is the parent’s role in helping to prevent eating disorders in their children, especially with regards to girls? 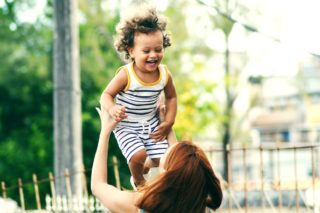 Eating disorders are placed on the same spectrum as addictive behaviour where the withholding of food / or the binge episodes helps to calm their very switched off (hypo-aroused) disconnected, shut down nervous systems. So in this sense the withholding of  food/binge purge cycles become calming for them, much in the same way as addictions soothe the feelings of these patients.

“As far as possible, a mother should try to be a good role model for their daughter/s. Your daughter will pick up on your behaviors around food and start to do the same, because that is what she would consider the norm. If you, as the mother, are too “scared” to eat certain foods, your daughter will start to have the same “fear”. A mother should also be careful of the way in which she is speaking about her own body, as well as the comments she is making about other people’s bodies,” says Lombard.

Practical tips for parents to ensure their children have a healthy relationship with food: 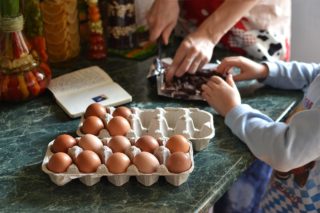 In this day and age, research is showing that the parents who spend a lot of time preoccupied by screens are experiencing increasingly difficult relationships with their children. Moreover – and this is heart-breaking – children have been admitting they resent their parents’ phones. Click here to find out more about this.