Nonhlanhla Joye’s sustainable and eco-friendly gardening technique not only helped her turn her health around, but has empowered her community, and may empower you too.

Let us introduce you to Nonhlanhla Joye, a 51-year old farmer form Cato Manor, Kwa-Zulu Natal, who last year represented South Africa on the international stage, and won a local Elle Magazine Impact Award for her agricultural innovation. A qualified herbologist, Joye has spent her life empowering her community in a variety of ways. 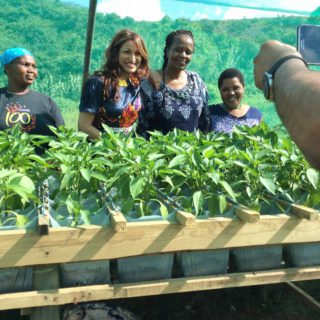 Before falling ill, she spent 10 years working for an NGO that fostered support groups for people who had experienced gender-based violence. This initiative quickly grew to encompass all people who were experiencing difficult socio-economic situations.

“It all started by asking the question, ‘Have you ever experienced…?’ and then we would bring people together who were experiencing the same difficulties, whether this was hunger, loneliness or violence. This provided them with a support network and an opportunity to bring change into their lived by getting to the root of what was causing their difficulty,” says Joye.

“When I fell ill, I could no longer function at the NGO in the same way, and had to stop working. I had developed a cancerous growth on my shoulder that had to be surgically removed. I was also undergoing chemotherapy. I realized that if I wanted to get back on my feet and heal, I needed to eat well. So I started growing my own vegetable garden in my backyard.”

However, in Cato Manor, chickens roamed freely and quickly got stuck in her crops.

“My garden was destroyed. I stayed inside for two days – I was so upset. When I left the house, I saw a ladder leaning up against a wall and I had an idea. I realized that I needed to lift my garden out of the reach of the chickens.”

This was the start of what would become a life-changing journey for Joye. She implemented a gardening technique in which the ladder was elevated and placed parallel to the ground. Plastic bags were then hung between the rungs. The soil and compost were placed in each bag and the seeds were sown. 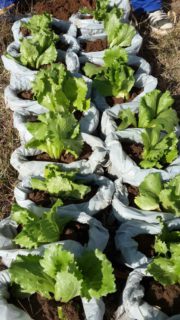 “What is great about this method is that it is very water and energy-frugal, making it inexpensive and better for the environment. It is easy to do, and therefore children, the elderly and the disabled are all able to participate. I also make my own compost from vegetable scraps, and use a homemade pesticide that is made from garlic and epsom salts, the vegetables are eco-friendly and there is less environmental fallout.”

These days, the technique looks a little more sophisticated, with the use of wooden structures in place of the ladder, and recyclable plastic bags. However, the point is that, with the use of basic implements that you can find in your house, anyone can use this technique.

Want to grow your own plants in a small space? Click here to learn more about vertical gardening – and how you can do it yourself.

What started as a way to heal herself and feed her family developed business potential when it attracted the attention of her community. “People started asking me how much I was charging for my vegetables, and because I had extra, I started to sell them. When I realized I could make an income out of it, I began to think of it as a little business.”

She started to include more women and youth from her community, and the technique took off. Now she supplies supermarkets, hospitals and restaurants in Durban with her eco-friendly products. The best part of this for Joye – as a person passionate about human growth – was that she was able to empower others in her community and create jobs.

Joye had learnt at the NGO that, unfortunately, people often develop a dependency on others, rather than learning to initiate change for themselves. This is something she wanted to address, and has now done so by creating the Umgibe Farming & Training Institute, which comprises more than 30 co-operatives. Joye was also joined by 52 schools in 2017, so that she could teach the method to learners and empower them from a young age.

“In this group I empower people to help themselves. As humans we all have the ability to help ourselves, and should embrace this. Rather than waiting for others to do something for us, we work to create a sense of responsibility – showing people how to be a the change they want to see in the community.”

Click here for more stories of gardening and empowerment.

Forest Bathing Could Be The Stress Therapy You Need