GenX Will Reach A Major Milestone In A Matter of Months

NEWS FLASH… In 2020, the GenX or Generation X, the  “sandwich” generation will hit the ripe old ‘early retirement age’ of 55.  Yes it’s true! Trust me. I took the news pretty hard as I’m born on its cusp in 1965, thus and will be one of the first to hit this milestone.

The Tide is Turning For GenX

GenX was born in 1965-1979, and as a lifestyle expert I am pointing this out because we are the generation least regarded all-time by mainstream media and most ignored by advertisers and marketers. However, this tide is about to change…

Today in America the average head of household is 52 years old. The 50+ is the largest demographic and will be for the next 50 years.

In 2050, there will be 83.7 million people age 65 and older, almost double the 43.1 million seniors in 2012. “The United States is projected to age significantly over this period,” says Jennifer Ortman, Chief of the Population Projections branch of the Census Bureau.

Age is No Longer A Number

I’m here to share with all of you that age is no longer a number, it’s an attitude.

We are living in an era of agelessness. Where aging is being totally redefined and consumer behavior is tribal, not generational

GenX is Growing Up

As a Gen-Xer growing up in L.A. in the 80s, it seemed like everyone was in the entertainment business in one way or another. I made my spending money as a teen with various part-time modeling jobs, dance fashion shows, as an aerobics TV show extra. My favorite job of all was getting paid to dance on a local TV show called MV3 Hosted by Richard Blade.  Armed with several wardrobe changes, we would tape three shows back-to-back every Saturday afternoon dancing on-camera to the latest New Wave music videos.  It was the “American Bandstand” dance show for our generation.

New Wave music provided me with an everlasting soundtrack of memories and identifiable moments. It shaped my teenage years intertwined seamlessly into MTV music videos and John Hughes movies, which I watched religiously.

Welcome To Your Life

Think of the final scene in “Sixteen Candles,” with a Thompson Twins song playing in the background while heartthrob Jake Ryan and Samantha Baker finally get together as he tells her to “Make a wish” as she blows out her birthday candles. 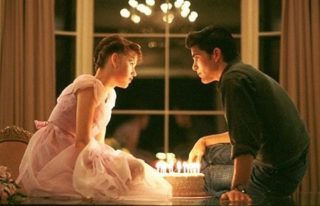 Or the ending in Real Genius; “Everybody Wants to Rule the World”, a classic 80s Gen-X song by Tears for Fears;

“Welcome to your life, there’s no turning back”….

“Nothing ever lasts forever, Everybody wants to rule the World.”

As I listen to these songs now, they still speak to me just as much as they did as a teenager over 30 years ago. Here’s what I’m getting at. Other than being older and wiser, when I look at my younger self and compare her to the woman that I am today, I honestly don’t “feel” so very different.

Today a 50-year old will often enjoy the same interests as a 25-year-old. Activities like travel, sports, cooking or the environment. We have a very similar marketing profile.

People in their 50s are happier and less stressed than those in their 20s and 30s. Also, as consumers they want and will pay for luxury upgrades because they believe they have “Earned it”.

The fact is these days all the decision-making, all the buying power and all the money is in the hands of a more mature consumer.

The future is all about the Generation X demographic, so why are we being ignored?

GenX the Most Ignored Generation in History

Review the graphic and ask yourself why is Generation X 1965-1979 completely left off this list?

In my research I found article after article on this “forgotten generation”. Which, of course, is bothering us, but we aren’t complaining because we weren’t raised to believe, “It’s all about me” like the Baby Boomers. 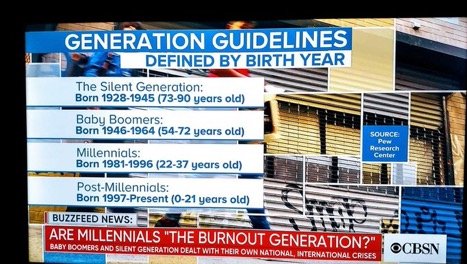 Members of Generation X spent a lot of time alone as children,  many of which were called “Latch-Key Kids.”  This is a term used to describe myself and so many of my friends whose parents worked full-time. Out of necessity from a very young age we walked ourselves to and from school, entered an empty unsupervised house with our own key, did homework first and rewarded ourselves by watching pre-dinnertime re-runs of The Brady Bunch and Partridge Family.  With no DVR’s to schedule a recorded TV show we were self-taught time management skills. This also created an entrepreneurial spirit amongst us as we were forced to think for ourselves from an early age and developed the valuable mindset of “being our own boss”.

A funny thing is happening in the workplace right now. For the first time in modern history there are five generations working side-by-side composed of multiple generations with members of GenX in managerial roles mentoring the younger generation.

People from Generation X currently make thirty-one percent of the total US income, even though they only comprise twenty-five percent of the population, and they overwhelmingly dominate the playing field, founding more than half of all new business.

Gen Xer’s makes up the highest percentage of start-up founders at 55 percent. X’ers like Elon Musk have created innovative start-ups whose explicit aim was to make the world a better place. Many others in his cohort followed in Musk’s footsteps: a whopping 55% of start-up founders are part of Gen X.

It’s time for a wake-up call to all your Brands and Advertisers. Ignore Generation X at your own risk.

Browse through any marketing magazine or website these days, and you’ll quickly notice your obsession with the millennial market and the up-and-coming Generation Z.

Think of the companies, magazines and brands currently targeting and catering to the “Over 50” market.

Can you even name a handful?

As a fun exercise, write them down on a piece of paper and review your list.

First, let’s start off with how sad it is there are so few brands, companies, magazines speaking to this 50+ goldmine.

If your list includes MORE Magazine then please remove it as they no longer target “The Over 40s Woman” having reformatted their publication last year to rebrand it to the millennial market  It’s probably a decision made by millennials!

The mature audience of today differs greatly from the many that went before them in outlook. Those who have grown up exposed to marketing and advertising are social media savvy and affluent. In fact, they have profited from social mobility and employment opportunities.

They are unlikely to fit a stereotype, and don’t want to be treated in a patronizing, stereotyped manner by marketers.

Of the platforms you wrote down, do you feel they’re messaging the 50+ audience well? Do you feel that they have a “finger on its pulse”? Or do you feel it’s time for a wake up call?

If you haven’t guessed already, I’m ready as a self-appointed “GenX Poster Girl” to bring awareness and change because “Age is so hot right now” and it’s time for a face lift.

Want to know why some communities live younger longer?

Linda Cooper is an award-winning TV Host, Producer and Writer serving as a brand ambassador to worldwide travel on her national luxury lifestyle series “Travel Time with Linda” and as a contributor to several lifestyle and travel publications. Her specialties include television and in lifestyle publications include the travel; lifestyle; luxury; tourism; hotels; restaurants; food/wine; fitness; spas; and retail shopping industries. Season One of ‘Travel Time with Linda’ aired nationally on AXS TV Network winning a 2018 Telly Award and is now available on Amazon Prime Video. Season Two featuring “Bucket-List Destinations” airs nationally Sunday mornings 8am ET on AXS TV Network and soon available on Amazon Prime.

Millennials: What You Can Learn From This Generation

Millennials: What Is Their Approach To Staying Youthful?

Linda Cooper is an award-winning TV Host, Producer and Writer serving as a brand ambassador for worldwide travel on her national luxury lifestyle series “Travel Time with Linda” and as a contributor to several lifestyle and travel publications. Her specialities include television and in lifestyle publications including the travel; lifestyle; luxury; tourism; hotels; restaurants; food/wine; fitness; spas; and retail shopping industries. Season One of ‘Travel Time with Linda’ aired nationally on AXS TV Network, winning the 2018 Telly Award and is now available on Amazon Prime Video. Season Two featuring “Bucket-List Destinations” airs nationally on Sunday mornings at 8am ET on AXS TV Network and is soon available on Amazon Prime.

GenX Will Reach A Major Milestone In A Matter of Months