Jon Snow is now a worldwide famous name played by actor Kit Harington in the epic Game of Throne series. However, recent reports suggest the entire experience and build-up whilst shooting for the series has hit Harington hard. His mental health has taken quite a knock and it’s no surprise after being so immersed in a show with such a massive influence.

Nobody expects to be hit with extreme feelings of stress, anxiety or depression. However, the most common trigger for these feelings to kick in only happens after a prolonged series of events. Apparently, Jon Snow told Entertainment Weekly that he has had to enter into a therapy program to help him cope with some personal issues. These issues seem to be specifically for stress and alcohol use.

Whether you are a famous actor, stress and alcohol are global mental health problems. They’re very common and it’s good to know that our favorite fantasy characters, like Jon Snow, are being so open about it. This gives us the courage to speak up and seek the help that we need to get better because it is out there.

Jon Sow (actor, Kit Harington) is fortunate enough to be able to afford a luxury retreat like Privé-Swiss to help him heal. But what about the average citizen? Luckily there are other facilities around the world that offer similar therapeutic programs and I am going to share some of those with you today as well.

The actor is 32-years-old and played as Jon Snow throughout the eight seasons of the ‘GOT’ series. However, he revealed that the finale of the series was’stressful.’ 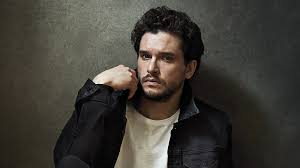 Reportedly, his stress showed itself after he found out that his character murdered Daenerys Targaryen in the final episode. I don’t think he was stressed because of this realization, it was more because he was completely exhausted, Harington explains that he was fully burned out and that’s why he spent the past month at the luxury Connecticut health retreat called Privé-Swiss. Apparently, this is a luxury facility where you can receive treatment for stress and alcohol.

Interestingly, Jon Snow checked in a few weeks before shooting the series finale of Game of Thrones this year. Clearly, the star was going through immense amounts of stress which we knew nothing about.

Why this rehabilitation retreat center?

Privé-Swiss is a rather unique boutique, private luxury mental health treatment program that confidentially serves clients on the Connecticut shoreline — on the east coast.  They have an excellent reputation for effective, time-tested, well-proven change programs. In fact,  the center was one of the very first “boutique private rehab programs” in the U.S. and still maintains the highest level of care available to individuals today!  They also continue to maintain a maximum of only 3 private clients at a time. The center is obviously used to managing high profile clients like Harington.

According to Mercury News, Harington’s individual treatment includes psychological coaching, practicing mindful meditation and cognitive behavioral therapy. These are all methods being used to help him combat stress and deal with negative emotions. Luckily, Harrington had time to take a break from his role as Jon Snow and use it to spend some time in a wellness retreat to help himself heal and rejuvenate. Sometimes, there are times in life when you need to stop and take time to really work on what’s going on inside.

Harington is not alone.  Research shows that depression and burn out rates among CEOs in the US may be double the national average.

The programs at Privé-Swiss offer fantastic tools and professionals to assist those people who find themselves unable to cope with life’s problems and temptations. According to the executive in Miami, every client must stay for at least two weeks to work through the necessary transitions during counseling, reflections, and realizations.

I think it’s easy for many people to get lost in despair and then to lose the spark they once had for life. Programs like this help people, like our famous Jon Snow, reignite that flame and head back into the world stronger and happier.

Every client receives 1-on-1 intensive treatment with licensed professionals. Jon Snow chose this place because of the exclusivity, clinical excellence and exceptional quality of care at Privé-Swiss. In addition,  only 1-3 clients are accepted into the program at one time. Each individual client stays in his or her own private accommodations in a shared residence and receives intensive, one-on-one personal programming from the finest professional team.

Therefore, the quality of service justifies the price. More importantly, you’re not treated as a group. You also not expected to listen to other people’s issues. You’re treated as an individual according to your needs. Because Jon Snow and any others who visit this retreat get personal attention, you will be able to treat your problems in a much shorter time frame.  Life is for living after all.

Privé-Swiss says that the main focus of the program is overall, ‘whole health’ recovery utilizing dialectical behavioral therapy. This approach incorporates mindfulness, interpersonal communication, distress tolerance, and emotional regulation, as well as other mind-body interventions.  These tools give you the necessary steps to regain control of your life.

From art therapy to yoga, to pilates, to meditation, to psychotherapy and massages. Privé-Swiss has it all. If you’d like to find out more information about their programs then visit them here.

Okay, to be fair Jon Snow is Jon Snow. He’s a famous GOT’s character and Harington has made himself a good career out it. There are benefits to being a celebrity. However, if you’re in a bad place and feel you’d benefit from a retreat like this but can’t afford 120 million US dollars per month. Don’t stress, because there are options available to you.

There are retreats to help people live more fulfilled and positive lives worldwide. In fact, more of them are popping up everywhere. I think the most important place to start is with you and to complete an in-depth analysis of your current state of mind. Distinguish how you are feeling and what you need from an experience like this. That way you will get exactly what you want out of it. Doing this will not only help you understand yourself better, but it will also allow you to select the right retreat for you. As I said, there are many.

That’s what Harrington had to do. He identified that he had a problem with stress, exhaustion, and alcohol as a result of playing Jon Snow and it coming to an abrupt end. He then selected the facility that was best for him. There’s doubt it’s top-notch but it’s not an option for many of us, financially.

If you’re looking to find a retreat try some of these handpicked ones by BookRetreats.Com. Another excellent option is Bridges to Recovery. This is a beautiful and private residential mental health facility. If a retreat is completely out of your budget then you can also look into more affordable day programs or online ones like the Anxiety Depression Association of America. There are also more therapeutic options that focus on meditation.

Why Did Jon Snow Need Time Out? 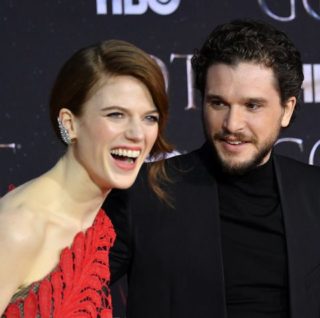 Apparently, during the shooting of season 8, the entire cast of GoT seemed to take quite a knock emotionally. Harrington says he had a difficult time with the end of the show because he played Jon Snow for eight seasons.

Moreover, realizing that it was the end of something they had all worked so hard on for so many years, was very difficult to swallow. I think Harington struggled with his mental health after this because it was that unpleasant feeling of thinking to yourself, ‘what next?’

With a show like GOT,   it is easy to see how invested the cast would become in it,  Just think about how attached all of us are just as viewers! No wonder Jon Snow and other cast members are feeling stressed out and lost when it all ends. Harington was extremely invested in the show’s central characters.

There’s even a behind-the-scenes documentary that shows him breaking down in tears after reading of the fates of Snow and Daenerys Targaryen (Emilia Clarke). He was also shown getting emotional during the final table reading with the entire cast.

A Cluster of Emotions

If I were to pass any kind of judgment. It would be that these are a bunch of emotions combined. Kit Harrington thought he had lost the role of playing Jon Snow entirely when his character was killed. This was before he knew he’d be reborn. He had to cope with fears and doubts about whether he could even act. More importantly, what he’d do afterward. It is a very positive thing that he took action to work on himself. I think we all have something to learn from that. It’s okay to ask for help when you need it. 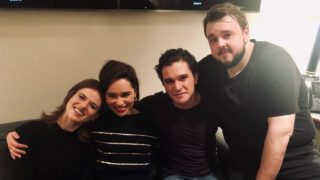 We all experience times in our lives where we feel extremely doubtful about what we are doing in life. We begin to question whether or not we know what we are doing, or if somebody is better than us. Half the time we are doing just fine. But with Jon Snow, I think Kit Harrington did an incredible job.

Closing the Chapter To Move Forward

Thankfully, Harrington has the full support of his wife and former GoT actress, Rose Leslie to help him get through his difficult times. Harrington explains to HARPERS BAZAAR that closing this chapter of his life has been a brutal experience, especially after nine years.

The new documentary, Game of Thrones: The Last Watch. The show aired on Sunday and shared a glimpse at Harington’s emotional goodbye to the show. After filming his final scene, he sobbed while addressing his beloved cast and crew:

“I feel like my heart is breaking. I love this show more than, I think, anything. It has never been a job for me. It’s been my life, and this will always be the greatest thing I’ll ever do and be a part of. You just have been, just, my family. I love you for it, and thank you so much.”

I believe that no matter what you do in life, you should put your whole heart into it. But when you feel that your mental health is at stake. You need to do something about it.

On another note, you can read more about how Jennifer Lopez manages to make 49 seem like 25. She’s got one of the fittest bodies in Hollywood. How does she do it? Find out here.

These Podcasts Will Help You Get Through Lockdown Much Easier

4 Ways Learning a Musical Instrument is Great for You