While we tend to associate the word ‘venom’ with death more than life – and for good reason – recent research has been working with the venom from all sorts of crawling life in order to find cures and treatments for a variety of health issues. We rounded up the three most notable breakthroughs medicine has recently achieved – and though they may be unconventional, each are making a big positive difference in health and wellness. 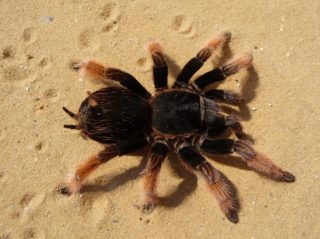 Anyone who has lived through a spider bite and its potent venom will tell you that it can be a particularly painful experience. Ironically, researchers are currently working with venom from the Peruvian green velvet tarantula in order to treat chronic pain.

Well, for starters, our brain registers pain by sending pain signals through specialised pathways called sodium channels. Because spider venom contains bioactive compounds that have neuroprotective properties, researchers believe this venom can be applied in painkillers so that specific sodium channels are blocked. In this way, pain signals are prevented from reaching the central nervous system.

Researchers are also working to develop a drug from tarantula venom to treat muscular dystrophy – a genetic disease that currently has no cure. Muscular dystrophy causes muscles to get weaker because the cell membranes let in too much calcium. However, the chemical AR 300 found in the tarantula venom, can stop the influx of calcium, consequently slowing the progression of the disease. Although unconventional, this research has the potential to improve the quality of life of people who suffer from this genetic condition.

A recent study shows that venom components isolated in certain animal venoms – most notably that of the Macrothele Raveni spider – can help prevent invasion from human cervical carcinoma cells.

It should be noted that this is not exactly new knowledge, as spiders and spider venom have been used in traditional Chinese medicine for ages. Now, however, research shows that the venom from this spider was able to effectively prevent cell growth in leukaemia cells. According to an article published in Leukemia Research, the myelogenous leukemia K562 cell line exhibited aptosis, induced by the venom from this particular spider. It also had a low inhibitory effect on lymphocytes, exhibiting a certain selectivity for leukemic cells.

Many of those who suffer from arachnophobia will be able to tell you their hearts could stop at the very sight of a spider. Well, now its venom could actually help to get it started again. The active protein it contains can block ion channels interfering with the heart rhythm, which leads to atrial fibrillation.

According to the study, tests were done on the hearts of rabbits, triggering them into arrhythmia with a jolt of electricity and then using extracts of the venom to suppress the abnormal heart rhythm that followed. The results from the petide, called GsMtx-4, were promising, especially since it also showed that there were very few risks of side effects, while the venom is not harmful to humans. The researchers noted that further research is now needed to determine whether the protein could have unwanted influence on the body in other ways.

Click here to find out why female mice matter in medicine – and why this was not always the case when it comes to research.