There’s no straightforward or simple answer to the question of how to live a long, healthy and fulfilling life.  This is what is so exciting about a new project about the daily rituals of 36 famous and successful women. You will discover that these unusual daily rituals are as interesting and diverse as each of these famous women.

A Deep Dive Into Their Daily Rituals

Let’s take a deep dive and see what tips we can find that you can apply to your own daily lives.

We all know that we need sleep. Not getting enough of it can have as many negative effects on our health and state of mind as any parent of a newborn can testify. Sleep deprivation can affect our ability to function and lead to bad habits. This can then cause weight gain and a general loss of health and fitness. But does that mean we need to go to bed nice and early at night-time and get a full 7-9 hours of sleep every night before rising in the morning fresh and ready to go? 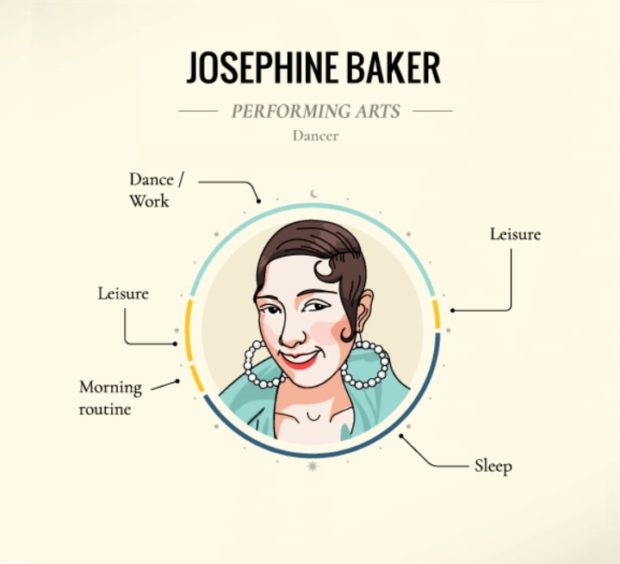 Clearly not all of these women thought so. Venezuelan-American visual artist Marisol was a night owl who didn’t go to bed until 4 am. She also slept until after midday, skipping the morning completely. Dancers Josephine Baker and Pina Bausch also worked into the early hours. Baker stayed up until after most of us had already started our breakfast before going to bed.

None of that stopped her from being a ground-breaking performer. She was the first African-American to star in a major motion picture. She was also a civil rights activist and agent for the French Resistance during World War II.  Baker achieved an awful lot in her 68 years, including owning a castle. So clearly her routine worked for her, as alien as it might seem to most of us. The same can be said for another night owl, screenwriter Lillian Hellman.

Some need less sleep than others…

She managed to combine her work writing for the screen – which came to a premature end when she was blacklisted after being accused of being a Communist – and stage while managing a farm. Hellman would stay up until the early hours of writing. Then she would have only a few hours’ sleep before getting up early to milk the cows or clean the barn. Incredibly, she’d still have the energy after yet more writing and more chores. She would stay up again until the early hours of the next day.

Another very successful woman with unusual sleeping habits is Lady Gaga. She stays up until 3 am and then gets up again at 7 am. She mu, making up for the lack of sleep with a nap after lunch. It’s not a surprise that she needs to break up her sleep though. She has to manage to fit five meals a day into her routine. It’s all part of Harley Pasternak’s 5 Factor Diet, which focuses on lean protein, fiber, healthy fats, complex carbs, and sugar-free drinks, spread out across five meals a day.

Of course, having very different waking habits to the norm tends to also mean that eating habits are equally different. We found the likes of Marisol and Coco Chanel both only eating their breakfast around midday, when the rest of us were onto our second meal of the day already. You might think that snacking wouldn’t be a part of these women’s daily routine. But for mixed martial artist Ronda Rousey, snack time is taken seriously. 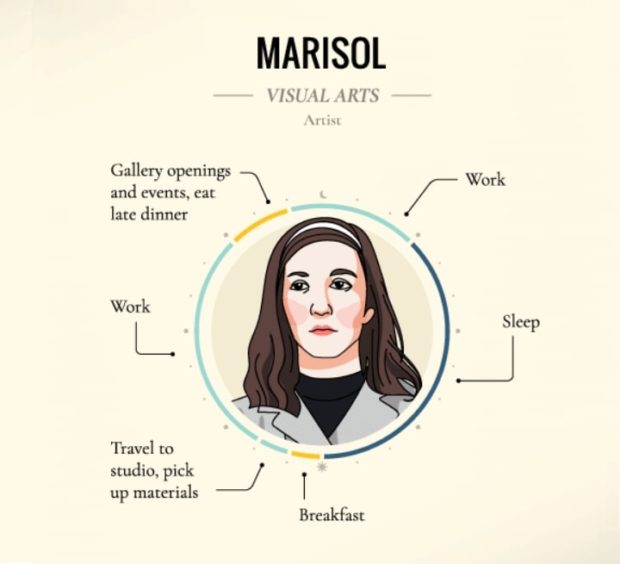 Clearly, she isn’t snacking on ice cream and candy, but instead, it’s berries and chia seeds, sweet potato yam chips or honey crisp apples with cashews. So if you think that Rousey is an advocate for the kind of snacking you do at your desk to get through a long afternoon at work, maybe think again. She also makes sure she fits time in her schedule for some chamomile tea and a post-exercise smoothie, while visual artist Josephine Meckseper’s daily rituals involve no less than three espressos to get her ready for work in the morning.

Getting Down to Work

If you want to achieve success in your life the most important information contained here is how all of these women managed to structure their day around the work they needed to get done. From what we’ve already seen when it comes to the hours of sleep, for some of them, working until late in the night and from early in the morning. Or as we’ve seen, both for Lillian Hellman was how they got to where they wanted to be, but that’s not the case for all of them.

Take Jane Austen, for example. She’s clearly a woman that achieved a lot in her lifetime and is still fondly remembered today for her work. But if you think she was spending all hours of her days writing, you’d be mistaken. Instead, she’d sit down at around 11 am and be done by mid-afternoon, having created enough of, say, Pride & Prejudice, to give herself the rest of the day off. Working 11-4, what a way to make a living, as another successful woman might have sang.

Still, Austen looked like a workhorse in comparison to fellow writer Flannery O’Connor, who started earlier than her at 9 a.m. but was done by midday. Again, this didn’t stop her from writing novels Wise Blood and The Violent Bear It Away, along with collections of short stories. 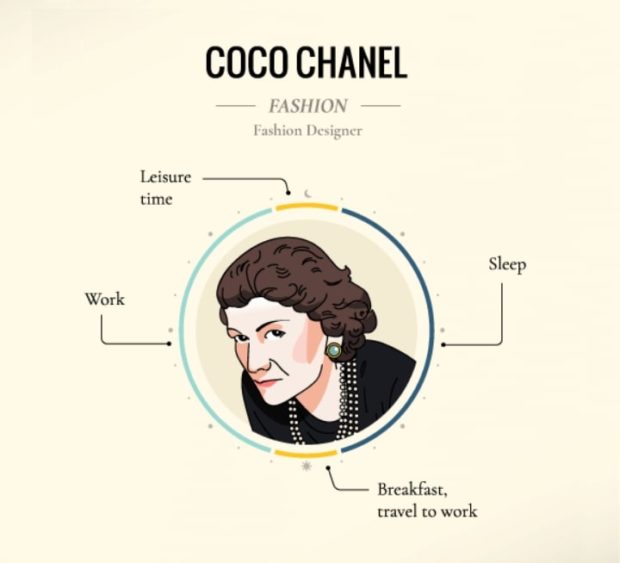 A definite theme is that writers seem to have to work less time than everyone else. Poet and writer of Battle Hymn Of The Republic, Julia Ward Howe, didn’t get down to it until the afternoon and even then used some of her work time to write letters and read. Oprah Winfrey’s daily routine is variable with a couple of short bursts either side of midday. She sometimes takes time to go gardening, but we guess she’s earned it.

By contrast, someone like dancer and choreographer Pina Bausch seemed to work most of her waking hours, either in rehearsals or analyzing how they had gone. Visual artists and sculptors have to spend the most time working. The likes of Yayoi Kusama, Marisol, Marilyn Minter, Hayden Dunham and Petah Coyne all spent a large part of their days creating their art.

The same can be said for designers like Coco Chanel and Elsa Schiaparelli. They worked very long hours. Was the fact that they were creating something they were so passionate about making the long working hours less of an issue (than they would for your average worker)? That would be a question for each of them individually of course.

Spending some ‘me’ time

The concept of having a healthy work/life balance is a relatively recent one, and it’s fair to say that we as a species still have some way to go when it comes to living up to that ideal, So how did our famous women manage that balance? As we’ve already seen, for some of them, daily life was built around long working hours to help to achieve their dreams and create works of importance, while others managed to work just a few hours a day and still made their mark on the world.

For Jane Austen, downtime after a hard afternoon’s writing meant talking and entertaining guests. This was a common theme across industries and centuries. In fact, both Oprah Winfrey and Martha Stewart also entertained fans in the evening. Some women featured preferred a quieter life, like Joan Jonas who enjoys watching old movies. Marie Bashkirtseff and Marilyn Minter, on the other hand, both liked to read.

Of course, leisure time doesn’t always have to come in the evening at the end of a busy day’s work. For Kim Kardashian, after waking her children and feeding them breakfast, she takes some ‘me time’ by having a morning bath. Gertrude Lawrence, on the other hand, spends her time flower arranging, playing chess and sewing. Walking dogs is a popular pastime, and both Lawrence and Oprah have enjoyed that as part of their daily routine.

Relaxing and De-Stressing Are Part of Daily Rituals

The purpose of so many of these leisure activities is to help with relaxation and de-stress. One of the first things Lady Gaga does when she wakes up is to meditate. Georgia O’Keeffe, on the other hand, liked to watch the sunrise and would go for a drive in the evening. It’s not all about the chill out time though, as some downtime has been spent exercising. 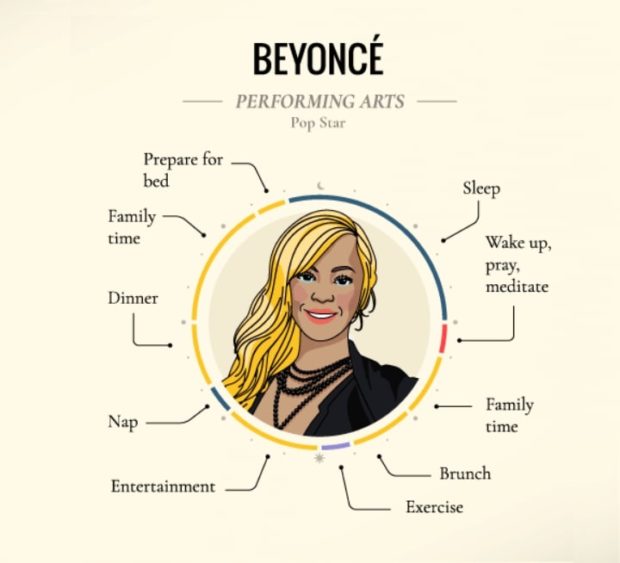 This is particularly common for modern celebrities on the list. And it’s not just athletes like Ronda Rousey and Serena Williams. For Martha Stewart, Beyonce, Kim K, and Oprah fitting in some exercise as they aim to stay fit and healthy and ready for the challenges their busy lives bring them. For Rousey and Williams, their careers depend on them keeping fit. So, their exercise regimes are more likely to work than leisure time. But back in the days before personal trainers, the likes of Georgia O’Keeffe and Gertrude Lawrence were taking walks to look after their own health.

The Bottom Line on Daily Rituals

Of course, if you have a 9-5 job, that will very much dictate your habits on working days. This is because it’s hard to deviate from the norm. However, that doesn’t mean you can’t make the most of the time that you have to yourself. Lots of these women worked traditional hours, some of them not in jobs that were necessarily their passion.

Frida Kahlo’s days had two main chunks of work, one doing her paintings, but the other teaching.  Meanwhile, writer Germaine de Stael had to spend time doing her accounts and business correspondence. Even Serena Williams needs to find time in the evenings to do social media and promotional work. Therefore, it’s far from the case that successful people get to ignore the more mundane aspects of their lives.

So, now you’ve seen the snapshots of these famous women’s daily lives. What lessons and ideas can you take from them? Perhaps the most insightful one is that we are all different. And as these women have shown, having a passion is a daily ritual we can all incorporate into our lives.

If you enjoy reading this, then here is another read to show the importance of being comfortable in your own skin in your daily rituals.

How To Get Renée Zellweger’s Anti-Aging Glow

James Ellaby is a professional journalist with over 15 years of experience. He writes mostly about business, entertainment and technology.