The Best Sleep Apps On The Market

There is nothing like a good night’s sleep. What’s more, while a good dose of dozing refreshes us, it also has been proven to improve memory, curb inflammation, and spur our creativity, not to mention makes us better people (sleep-deprivation is a recipe for crankiness and general displeasure). Some studies even suggest that getting enough shut-eye can help us to live longer.

But, when sleep eludes us, the opposite happens: we feel more stressed, less creative and way less likely to have any form of zest or flair. Thankfully, if you are one of the many people who – when stressed or over-taxed – battles to settle down for the night, there’s an app for that. In fact, there are several apps. Here’s our definitive list of the best sleep apps on the market: some for monitoring, some for waking, and some to get you to lala land in the first place.

We’re all familiar with these makers of the fit-bit like Jawbone Up wearable, but what you may not know, is that this company also have a free Jawbone Up app for iOS and Android. The app can track both light and deep (REM) sleep. Unfortunately, to optimise it, you will need to invest in the Jawbone Up wristband, which you then sync to your phone.

The app then pulls data from the Up or Up 24 wristband, and allows you to see how many minutes it took you to fall asleep on a given day, how long you were in bed and the number of times you woke up. What’s more, the wristband will connect to your

smartphone using Bluetooth Smart, which is power efficient, so it won’t kill your battery while you kip.

It makes sense that a company best known for making baby monitors, has now branched out into enhancing the sleep of weary parents. The French company offers a free app for iOS called Health Mate app. Health Mate stores your sleep data from the accompanying Pulse armband and uses this data to compare how you fare on the sleep scale every night (you can compare each night’s sleep to see when you slept best, which you might be able to link to pre-bedtime behaviours), and it provides insight on what wakes you up. The app also keeps track of your heart rate and breathing cycles as you wonder off to lala land, and – if you need a bit of a kick in the morning – it features a personalised wakeup system too.

Another European competitor, this time from Finland, is Beddit. Unlike the other apps listed thus far, the Beddit app doesn’t rely on a wearable: rather, it transmits data from a thin film sensor which you place under your bedsheets to a free Apple smartphone app. The tech behind this little snooze app is pretty complex, as it relies on ballistocardiography information transmitted from the bed sensor. This includes information on your cardio respiratory functions (breathing and heart rate) by detecting movements caused by your breathing movements and heartbeat. The Beddit app measures sleep time, the time it takes you to nod off, and the number of times you wake up. What’s more, if you happen to be a bit of a snorer (or require proof that your partner is) the Beddit app also records snoring.

While the Sleep Cycle app does not give you as much info on how you sleep, it is really great for ensuring that you wake up feeling refreshed. See, when you set an alarm for a random time, you can awaken feeling disoriented and groggy if it happens to go off when you are in a deep state of sleep. The Sleep Cycle app counters this horrible happening by waking you when you’re sleeping the lightest. 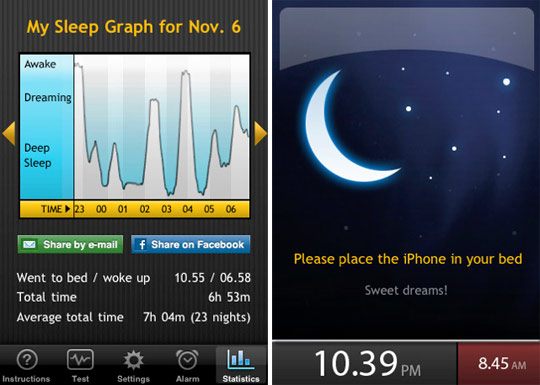 Sleep Cycle works on most Android devices, as  well as iPhones and works by recording your percentage of sleep quality and your average time in bed. It then uses these measurements to track your sleep phases, and wake you during light sleep. Thus function only works if you have an iPhone, though, and you need to be prepared to take your cell to bed!

Okay we will admit that the name is a little creepy. But, if it not so much the monitoring of sleep you desire, but rather the ability to get to bed in the first place, then this could help you. Andrew Johnson is a hypnotherapist who has released many, many audio sessions to help relax your body and mind when it’s time to hit the hay. Essentially, you listen to the Johnson’s sonorous voice tell give instruction and suggestions, follow along, and you should be relaxed in no time.

If the idea of listening to a middle-aged hypnotherapist chat to you doesn’t sound like something you’re up for (although it really does have great reviews), then something like the Sleepmaker Rain app is for you. Some of us sleep best when we’re listening to natural sounds like rain. The free version, available on Android, lets you set how long you would like the sound to play (so that you don’t wake up in the middle of the night and it is still “raining”. The sounds available are nice, and are actually all real recordings of rain in Tasmania.

Stress and Sleepness Nights: Here’s What To Do

Get Your Sleep Schedule Sorted In 2020

Xanthe Hunt is a journalist and writer with a special interest in mental health and health-related writing. She graduated from Stellenbosch University in early 2014, and has been travelling and freelancing since. Currently based in Cape Town, she is now interning for ELLE Magazine Online.

The Best Sleep Apps On The Market