Understanding The Runner’s High And How To Achieve It

If you ever need another reason to believe that exercise really is good for you, here it is. Not only do your fitness, blood circulation, metabolism, energy levels and various other well-known elements of your health benefit from regular forms of different exercise, but new studies show that your brain is also affected – to the point where it can achieve a natural, healthy high.

What is the runner’s high?

Many of those who regularly don their running shoes and take to the earth are well acquainted with the great sense of exhilaration that follows after a decent few kilometers, but it is not a feeling achieved by all. Why some get it and others don’t is still a mystery, but researchers have discovered new evidence that it involves changes in the brain during exercise – and there’s a new twist to the matter.

While in the past, studies pointed to the runner’s high being due to endorphins being released as a result of running for a certain period, researchers are now saying that these chemicals are, in fact, too large to pass through the blood-brain barrier quickly enough and that their effect is more on the muscles than on the brain. Instead, the study, which was published by the National Academy of Sciences, is suggesting that the euphoric feeling is due to the release of endocannabinoids, which is a different form of chemical our bodies produce whilst exercising.

If the word reminds you of marijuana, that’s because the effect is similar to that of this chemical. According to runners who trained for marathons or triathlons, when it is released in the brain, they experienced a feeling of euphoria, effortlessness, energy, strength, and achievement. For many runners, it is so good that this the very reason they keep on running.

How can you have one yourself? 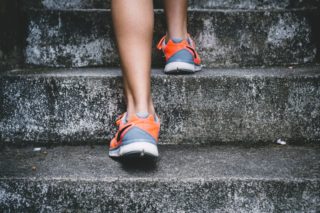 Today, shorter, more intense workouts like HIIT training is currently making the case that more effective fitness is better suited for today’s time-starved individual. However, you are more likely to achieve the runner’s high through longer, more moderate bouts of exercise. This is why those training for long-distance running events, such as a marathon or triathlon, are more likely to experience these regularly, as you need at least one hour of continual, rhythmical activity. In fact, the longer the continued exercise, the better your chances of having a runner’s high. These guidelines translate into steady-state cardio, which, if you are doing HIIT training, you need at some level anyway to balance out your training sessions.

In other words, the formula to achieve a runner’s high is as follows:

1-2 hours of steady-state cardiovascular exercise, carried out at a 6 out of 10 level of intensity.

This formula ensures that the blood flow is maximized and the endocannabinoid receptors are most stimulated and receptive. Also, some studies suggest that it’s best to go running in the morning. This is when your endocannabinoid levels are higher than other times of the day. According to Dr. Cecilia Hillard, director of the Neuroscience Research Centre at the Medical College of Wisconsin, you need eight hours of sleep for optimal endocannabinoid production. Besides, your levels of this chemical are three times higher when you wake up than when you go to bed.

The bad news is that, especially for beginners, you aren’t likely to experience a runner’s high right from the get-go. This is because your body is not used to continual steady-state exercise for that amount of time. You need to ease into it. However, after a few weeks of faithfully building your endurance, you can start to expect it. This should be decent motivation to keep at it with your sessions on the tar or treadmill.

Also, don’t expect to have a runner’s high every time you run. Remember that there are quite a few things that need to line up for this to happen. Besides, even experienced runners don’t always get it.

Now for the good news. You don’t even have to run to experience a runner’s high! Just about any decent form of steady-state cardio workout can bring about this effect. As long as you stick to the aforementioned pace and length of time. Think biking, swimming, etc. Find the workout you enjoy and work at it until you feel it.

Besides, when you do feel it, this experience can push you to go harder and farther. This will result in an even more intense workout. This is one reason why committed athletes can keep on going through difficult training sessions, because these chemicals are carrying them, at least to an extent.

However, they had to work hard to get to that point, as do we all. Here’s how to get there yourself.

First things first. Don’t try to put in two hours from the start. Instead, begin slowly and build your endurance through regular, steady-state runs over a longer period. Make sure you have all the elements taken care of. Adequate sleep, nutrition, and running gear are important. Keep doing this until you can complete at least a full-hour run without stopping. In time you will know the runner’s high yourself quite well. Click here to discover other benefits of running and why you should start young.

Understanding The Runner’s High And How To Achieve It