When it comes to pets, dogs are definitely the top of the list, with their furry skin, unconditional love, and unwavering loyalty. In addition to this, new research has suggested that man’s best friend may also be the key to helping us find the treatment for brain cancer, in both canines and humans.

Diffuse gliomas are a common form of brain cancer that refers to a variety of tumors in the central nervous system. glioblastoma is the most aggressive of these cancers and, unfortunately, diffuse gliomas tumors are extremely difficult to treat, and they also have low survival rates with only 25% of glioblastoma patients surviving more than one year, and only 5% of patients surviving more than five years.

That said, these types of tumors not only affect humans but dogs as well. In fact, the tumors developing in dogs as frequently as they do in humans. That said, a new study believes that examining tumors in canines may help to better understand them in humans. This could then potentially lead to an effective form of treatment.

Researchers from Jackson Laboratories in Maine, led by Prof. Roel Verhaak,  set out to study the evolution of glioma tumors in canines in order to compare them with humans. The glioma pathology in humans and dogs share many similarities. Thus, the researchers believe that dogs could provide the best model to help better understand these types of brain cancer. As such, Verhaak and his team attempted to identify whether glioma tumors developed in the same way in canines and humans. 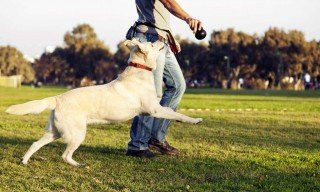 To do this, the researchers analyzed the molecular signatures of 83 glioma samples from post mortem dogs and compared them with human biopsies from both adults and children. They used a wide range of molecular sequencing technologies in order to obtain this information.

The findings, published in the Cancer Cell journal, revealed significant similarities between the two, with both humans and canines sharing mutations in genes that belong to well-known cell cycle pathways.

The researchers also found that gliomas in dogs were more similar to gliomas in children than they were in adults. They also noted that the mutations occurred at similar times of life in both dogs and children.

The findings then suggest that dogs and humans develop these types of tumors in a similar way.

The researchers believe this helps to allow for a better understanding of the relationship between human cancers and those of dogs. This, in turn, will then help the treatment prospects of both species.

“While the veterinarian’s office is somewhat different from both human medical and basic research settings, dogs represent a potentially effective model for humans.” explains  the director of research communications at the Jackson Laboratory, Mark Wanner.

What about other health benefits do dogs provide?

Now while dogs may help provide tools to better understand brain cancer in humans, that’s not all they’re good for. In fact,  your four-legged canine friend can do wonders for your health in other ways.

In your quest to live a greener life in 2020,  you need to make sure to include your pets as well. That said, it’s important to know how to become an eco-friendly pet owner.

Coronavirus Weekly Update: Where Are We Now?