The World Has A Drinking Problem Says WHO

The WHO (World Health Organization) says 283 million individuals are currently battling alcohol-use disorders and over 3 million people have died of alcohol-related diseases each year.   Its annual global status report provides a general review of alcohol consumption and harms in relation to the UN Sustainable Development Goals (1). The report also describes what the world’s nations are doing to counter the growing burden of drinking-related diseases and deaths.

The world has a drinking problem

The report found that around 2.3 billion people around the world currently consume alcohol. It also revealed that approximately 283 million individuals are currently battling alcohol-use disorders. 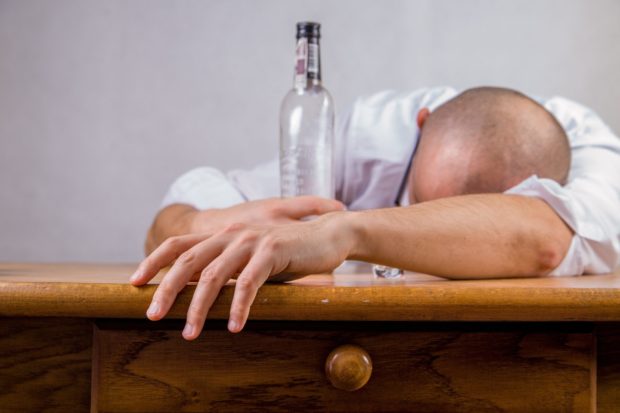 “Far too many people, their families and communities suffer the consequences of the harmful use of alcohol through violence, injuries, mental health problems and diseases like cancer and stroke,” said Dr Tedros Adhanom Ghebreyesus, Director-General of WHO. “It’s time to step up action to prevent this serious threat to the development of healthy societies.”

Regarding alcohol-related deaths, the report revealed that 28% of the deaths were due to injuries (traffic crashes, self-harm and interpersonal violence). 21% were due to digestive disorders, 19% due to cardiovascular diseases, and the remaining 32% was as a result of infectious diseases, cancers, mental disorders and other health conditions.

Despite some positive global trends in the prevalence of heavy episodic drinking and number of alcohol-related deaths since 2010, the overall burden of disease and injuries caused by the harmful use of alcohol is unacceptably high, particularly in the European Region and the Region of Americas.

Globally an estimated 237 million men and 46 million women suffer from alcohol-use disorders with the highest prevalence among men and women in the European region (14.8% and 3.5%) and the Region of Americas (11.5% and 5.1%). Alcohol-use disorders are more common in high-income countries.

Global consumption predicted to increase in the next 10 years

How much alcohol are people drinking?

The average daily consumption of people who drink alcohol is 33 grams of pure alcohol a day, roughly equivalent to 2 glasses (each of 150 ml) of wine, a large (750 ml) bottle of beer or two shots (each of 40 ml) of spirits.

Worldwide, more than a quarter (27%) of all 15–19-year-olds are current drinkers. Rates of current drinking are highest among 15–19-year-olds in Europe (44%), followed by the Americas (38%) and the Western Pacific (38%). School surveys indicate that, in many countries, alcohol use starts before the age of 15 with very small differences between boys and girls.

Worldwide, 45% of total recorded alcohol is consumed in the form of spirits. Beer is the second alcoholic beverage in terms of pure alcohol consumed (34%) followed by wine (12%). Worldwide there have been only minor changes in preferences of alcoholic beverages since 2010. The largest changes took place in Europe, where consumption of spirits decreased by 3% whereas that of wine and beer increased.

In contrast, more than half (57%, or 3.1 billion people) of the global population aged 15 years and over had abstained from drinking alcohol in the previous 12 months. 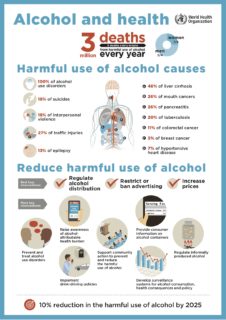 “All countries can do much more to reduce the health and social costs of the harmful use of alcohol,” said Dr Vladimir Poznyak, Coordinator of WHO’s Management of Substance Abuse unit. “Proven, cost-effective actions include increasing taxes on alcoholic drinks, bans or restrictions on alcohol advertising, and restricting the physical availability of alcohol.”

Higher-income countries are more likely to have introduced these policies, raising issues of global health equity and underscoring the need for greater support to low- and middle-income countries.

Almost all (95%) countries have alcohol excise taxes, but fewer than half of them use other price strategies such as banning below-cost selling or volume discounts. The majority of countries have some type of restriction on beer advertising, with total bans most common for television and radio but less common for the internet and social media.

Despite some positive global trends in the prevalence of heavy episodic drinking and number of alcohol-related deaths since 2010, the overall burden of disease and injuries caused by the harmful use of alcohol is unacceptably high, particularly in the European Region and the Region of Americas.

Alcohol abuse can destroy all aspects of your life

Yes, a glass of wine has been linked to health benefits due to the presence of the powerful antioxidant resveratrol (3).

However, the excessive consumption of alcohol does little to benefit your health or your life.

In addition to increasing the risk of road injuries and diseases, alcohol abuse can also lead one to start abusing prescription medications like opioids. It can cause you to become more violent and unproductive both at work and at home. This can then cause your relationships and both your home and work life to suffer. This lack of stability and support structure is likely to take a toll on your mental health.

Could you have a drinking problem?

While there are plenty of natural stress relievers, a lot of us often use alcohol as a coping mechanism. However, this coping tool can take control of our lives. This is why it’s important to keep an eye out for any signs that suggest that you may have a problem.

Alcoholics Anonymous, an association that sets out to help recovering alcoholics, has a test on their website that was created by John Hopkins University Hospital to help one better determine whether they are suffering from alcoholism.

Do you lose time from work due to drinking?

Is drinking affecting your reputation?

Have you gotten into financial difficulties as a result of drinking?

Do you turn to lower companions and an inferior environment when drinking?

Does your drinking make you careless of your Family’s welfare

Is drinking jeopardizing your job or business?

If you’ve answered yes to one or more of these questions, it’s important that you reach out to a professional who can assist.

Telemedicine And The Changing Healthcare Landscape

Stress and Sleepness Nights: Here’s What To Do

The World Has A Drinking Problem Says WHO