Endocrine Disruptors: Avoid These 8 To Protect Your Hormones

As if eating a healthy balanced meal and leading an active lifestyle wasn’t enough. If you really want to ensure your well-being, you’ll need to keep an eye out for endocrine disruptors.

As convenient as our modern lives have become, it’s unfortunate that endocrine disruptors are now found everywhere. That said, the occasional contact with these substances isn’t the issue but rather that one comes into contact with them multiple times a day. As a result, these substances will soon begin to throw off your hormonal balance and, as hormones help to regulate a variety of vital bodily functions, jeopardize your general health.

What exactly are endocrine disruptors?

According to the World Health Organization (WHO), an endocrine disruptor can be defined as an exogenous substance or mixture that alters function(s) of the endocrine system and consequently causes adverse health effects in an intact organism, its progeny, or subpopulations. 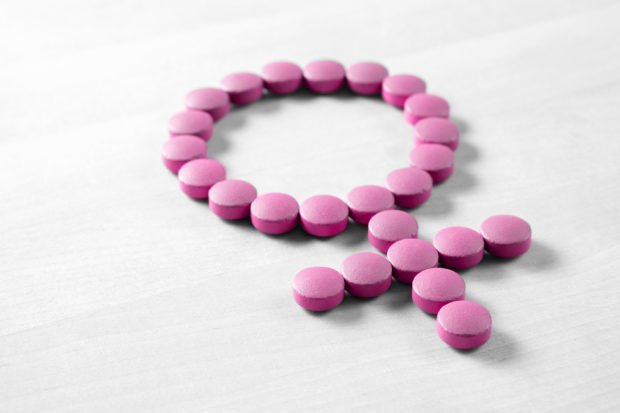 The endocrine system is a network of hormones and glands that helps to regulate and control the activity of our cells and major organs. It helps to regulate weight, metabolism, reproductive functions, growth, sexual drive, sleep patterns, and mood. Endocrine disruptors affect the endocrine system’s ability to function properly by either increasing or decreasing the production of certain hormones. They are also capable of blocking the release of hormones from endocrine glands and of mimicking the actions of certain hormones.

That said, the advisable thing to do would be to stay clear of these substances as they can affect both your health and that of your unborn child.

According to a study conducted by the Environmental Working Group, traces of 287 chemicals were found in the umbilical cord blood of the 10 American babies it tested. The results found that;

In 1996, the Environmental Working Group (EWG)  was tasked with the issue of addressing endocrine disruptors and as a result, they’ve compiled their own Dirty Dozen list in an effort to educate consumers about the worst hormone-altering chemicals.

It may take some time to completely rid your world of these hormone disruptors. However, we’ve compiled a list of 8 of the most common ones found. We’ve also suggested how best you can avoid them to better protect yourself and your family.

Agricultural herbicide contains traces of atrazine. However, once sprayed on corn crops, the substance easily makes its way to water sources that are catering for both humans and animals (1).

According to a study published in the Proceedings of the National Academy of Sciences of the United States of America journal, low levels of atrazine were found to have turned male frogs into females that are able to produce viable eggs. Separate studies have also linked the compound to childhood leukemia and Parkinson’s disease.

Pesticides also contain inorganic arsenic. Unfortunately, not only is it a common endocrine disruptor but, according to studies, it is also a known carcinogen.

If you want to limit your exposure to these substances, it’s best to invest in a good water filter and ensure that you add it to all of your home faucets.

Bisphenol A (BPA) is found in the lining of canned foods and plastic food-packaging materials such as containers and jars. BPA molecules from the plastic containers can leach into food – especially when the container is heated in the microwave – and slowly make its way into the body.

The U.S. Centers for Disease Control and Prevention (CDC) believes that more than 90% of Americans carry traces of BPA in their bodies (2). Why is this troubling? Well, according to a body of research, BPA has been linked to breast cancer, reproductive and fertility problems, obesity, early puberty, and heart disease.

The best way to avoid BPA is to try to clear your life and household of any plastics. Here’s how; 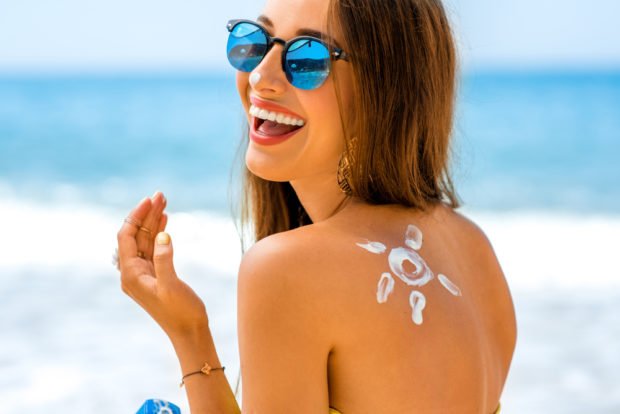 Sunscreen is an important aspect of your skincare regime that one should never, ever, under any circumstances, leave out. That said, there are a few sunscreens that contain toxic chemicals that can be detrimental both to your health and that of the environment. These include:

This is a chemical commonly used in sunscreens due to its ability to absorb sunburn causing UVA rays. Unfortunately, avobenzone lacks stability. So, when exposed to the sun for longer than 30 minutes, it can affect your hormones. So much so that it can compromise the health of your entire nervous system.

Officially banned in Hawaii, oxybenzone is found in the majority of non-mineral sunscreens. The compound can poison the algae that symbiotically support coral reefs in oceans and this then contributes to the destruction of an already pressured ocean ecosystem.  Furthermore, the chemical has also been found to cause hormonal disruption in newborns as well as cell damage (4).

Known for helping ensure that avobenzone works longer, octinoxate is capable of mimicking the actions of hormones. As a result, it can affect thyroid and reproductive function.

The best way to avoid these toxic chemicals is to opt for natural, mineral sunscreens such as Sky Organics, Raw Love, and Kiss My Face Kids.

Dioxin is a highly toxic compound that mainly accumulates in the fatty tissue of animals. As a result, the majority of human exposure is through meat and dairy products.

According to a study published in the journal Molecular Human Reproduction, dioxin is capable of not only disrupting hormone signaling and reducing fertility, but it also has the potential to cause spontaneous miscarriage in humans.

In addition to trimming the fat from meat and consuming low-fat dairy products, one can also avoid dioxide contamination by only consuming organic, grass-fed, and free-range products from small or local farms.

Did you know that the average woman uses around 12 personal care products every day, exposing herself to approximately 168 unique chemicals? What’s more, these chemicals penetrate deep into the skin and soon accumulate in the body. This then increases the risk of severe health problems.

A majority of cosmetics and personal care products contain preservatives known as parabens. These include shampoos, perfumes, lotion, and deodorant. Unfortunately, they can disrupt hormonal health. 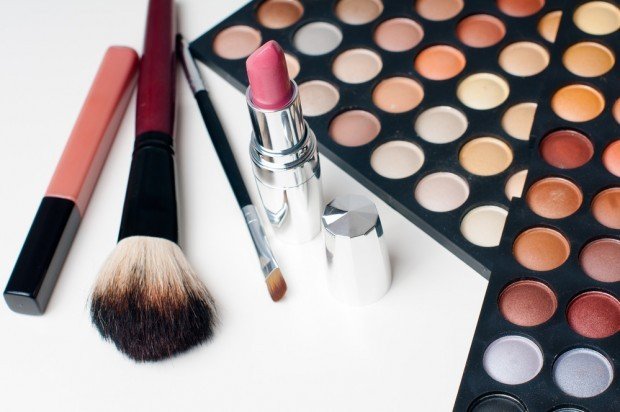 Parabens possess the ability to imitate the hormone estrogen. Furthermore, a study published in the Journal of Applied Toxicology found the substances present in over 90% human breast cancer tumors.

If you want to reduce your exposure to parabens, it’s important to always read the labels. Additionally, one should switch to cleaner, greener skincare brands, such as Plum, Forest Essentials, and Mamaearth.

Found in nonstick cookware and other stain resistant and water-repellant products, PFCs (perfluorinated chemicals) are endocrine disruptors that leech into your food, especially when heated.

According to various studies, these chemicals have been linked to health issues such as delayed motor development, low sperm count, delayed puberty, early menopause, and infertility.

If you want to avoid any exposure to PFC’s, it’s advisable that you consider using cast iron pans instead.

If you weren’t already eating organic produce, pesticides are the exact reason why you should start to.

Pesticides help to prevent large quantities of crops from spoiling. They do this by killing a wide variety of crop-eating organisms. Now whilst their function seems to be for the good of food growth, the reality is that pesticides pose some serious health concerns.

As mentioned, if you want to avoid pesticides then always buying organic produce is the best way to do so. However, as organic produce can be a little costly, the second best thing to do would be to choose conventionally grown foods known to have the least amount of pesticide residue.

Plastic containers and toys, hair sprays, nail polish, and perfume all contain traces of phthalates. They help to soften and strengthen plastics. They also help skincare products soak into the skin. 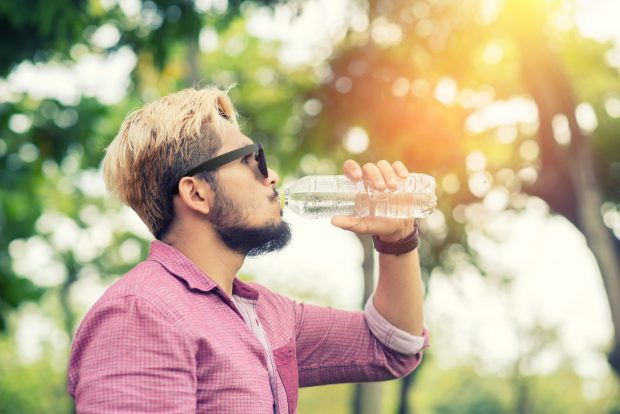 However, these chemical additives have been linked to upsetting the hormonal balance by lowering sperm count and motility, increasing the risk of miscarriages, and causing birth defects. They’ve also been linked to ADHD, and thyroid dysfunction.

Once again, the importance of reading labels cannot be emphasized enough when it comes to avoiding endocrine disruptors. Stay clear of any cosmetic products that contain phthalates or have fragrance listed as an ingredient. Additionally, avoid any plastic food containers, plastic children’s toys, and plastics with the recycling label #3.

If you want to ensure a healthy life, it’s best to keep your hormonal health at an optimum level.  One should limit the number of endocrine disruptors that you come into contact with. In doing so, you’ll help protect yourself and your family from any detrimental health issues.

Endocrine Disruptors: Avoid These 8 To Protect Your Hormones