Eccentric Training Is The Tweak Your Workout Needs

I’m somebody that has to be active one way or another. Whether it’s dancing, going to play tennis or hitting the gym hard. Yet, once I’m in a routine, it’s difficult to find ways to get better results. I’ve found that we push ourselves, harder and harder- and then, BOOM we hit a plateau or encounter an injury. Not exactly ideal. Usually, this is the cue to spice your workout up or tone it down, the eccentric way.

That’s why I can relate hugely to fitness writer and enthusiast, K. Aleisha Fetters. She tells SELF: “I love lifting heavy. I live for workouts when I realize that, yes, I’m ready to go up in weight. It makes me feel so strong and accomplished.” But just like you and I, Fetters ignored an extremely important thing: actually concentrating on the way you lower the weight.

On the job she interviews many researchers and fitness physiologists. She’s even almost qualified as a certified strength and conditioning specialist herself. And in doing so- she learnt that your focus must be on lowering the weight, as SLOWLY as possible.

So maybe instead of lifting more, faster. Take it down a notch and go lower, slower. Sounds eccentric right?

Hold on. Before you start spending ten seconds lowering into a squat and trying to understand why you should be doing just that. Fetters says you must first understand the muscles you’re trying to grow, trim or tone.

She says: “First, muscle fibers perform three different types of actions: concentric, eccentric, and isometric. A concentric muscle action is a contraction or shortening, which is what’s happening in your glutes when you go from a squat to standing. An isometric action involves your muscles working in a super-still position, like your glutes when you’re trying to hang out in a wall sit for 30 seconds.”

Okay, but what about eccentric movement?

You know that lowering part of an exercise? That’s eccentric movement. According to Fetter’s “it’s when your muscle works as it’s lengthened, like those glutes do when you’re lowering into a squat, or like your biceps do as you’re lowering a dumbbell after a curl. And, it turns out, every muscle fiber in your body is the strongest as it moves eccentrically.”

This isn’t just because of gravity. She says the strength happens because more parts of the muscle used for contracting, remain attached to each other throughout all eccentric movements. Therefore together they produce more force.  Fetter’s adds that “there may also be increased tightness in some proteins within the muscle fiber during eccentric actions, which makes the muscle more taut (aka strong). Hence why lowering into a squat feels a heck of a lot easier than getting back to standing.”

In other words, eccentric training is best done by removing your focus from the concentric (contracting) part of your workout and directing it towards the eccentric (lengthening) part.

But, why should you have to change your entire workout? If these five killer benefits of eccentric training don’t convince you, nothing will. 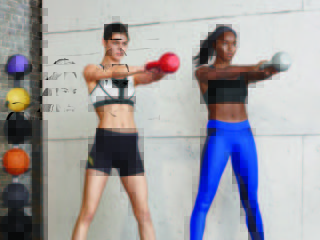 Fetter’s says, “rep per rep, eccentric training is superior to concentric training at building both muscle size and strength. After all, since your muscles are strongest as they move eccentrically, if you want to push your limits, you’ve got to work eccentrically.” However she warns that eccentric exercises  increase delayed onset muscle soreness (DOMS).  This is that awful stiffness you feel the next day, after a hardcore workout. She explains that with eccentric movements “the weight is greater than the amount of force produced by the muscle, so it creates more microscopic damage to the muscle.” Yes it burns, but is totally worth it.

The recovery period after you’ve torn your muscles and sweated your heart out, is when your body works the hardest. This is actually a bonus. Small studies found that slowing down the eccentric part of your lifts actually increases your 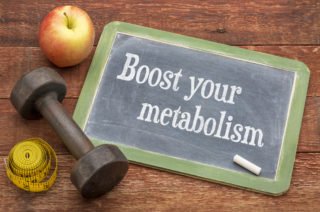 resting metabolic rate (RMR). This is the number of calories you burn while doing absolutely nothing. Fetter’s refers to the Journal of Strength and Conditioning Research where a study with 16 partakers found that eccentric training boosts RMR for up to 72 hours post-exercise. She says the “subjects performed the concentric phase quickly over one second, and slowed down the eccentric over three seconds.” Interestingly, another study also found significant increases in RMR for up to 48 hours after leg presses that focused on eccentric movement. This type of training does do a lot of damage to your muscles. However this damage requires just as much energy to repair it- which burns fat!

Does the thought of doing the splits make you cringe? Well, good news is eccentric training may be the solution to never doing the flexibility test again. In the North American Journal of Sports Physical Therapy, a study of 75 athletes with tight hamstrings were put to the test. SELF says the one’s performing eccentric hamstring exercises doubled their flexibility over those who continued with static (bend-and-hold) stretching.  “The trick is to move through your entire range of motion as you perform the eccentric phase of your exercise. Over time, that range of motion will get bigger and bigger,” explains Fetter’s. Another review also agreed that eccentric exercise will definitely increase your flexibility. However more research is still required to determine just how eccentric strength training compares to static stretching.

So not only do you strengthen your muscles, but you will also strengthen your body’s connective tissue. The tissue helps your body repair any aches and pains as well as prevent injuries. Fetter’s says this can range from tendinitis to ACL strains. Moreover, that these eccentric exercises are crucial in sports rehabilitation centers and are great for people sidelined with exercise injuries.

Sounds like the kind of workout you do in the weights room, right?  Think again. Fetter’s says these movements are in all workouts. “From beach volleyball to 10K races.” (This might also explain your very sore quads after a long run downhill.) So, in strength training exercises (all three: concentric, isometric and eccentric) you are preparing  your body for every possible challenge. Plus, another study found that eccentric moves are vital to increasing your body’s ability to produce power. Fetter’s says “this is critical to delivering hard-hitting volleyball serves and setting new race PRs.”

Okay, But How Do You Add This To Your Workout?

The best way to start is by slowing down every move you make. Fetter’s says bodyweight exercises are apart of the 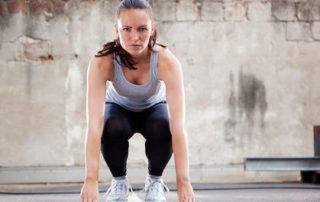 lowering phase. These are moves like squats, lunges, deadlifts, push-ups, pull-ups, biceps curls, shoulder presses and rows. She adds that every now and then, “you’ll find an exercise in which the eccentric phase is actually up, like lat pull-downs.” It’s best to think of it as returning the weight back to its starting point.

So when you workout in the future hold the eccentric part for about three seconds. She explains that, “if you’re performing a bench press, lower for 3 seconds, and then push back up in one second. If three seconds feel doable, try lowering for five or 10 seconds. Seriously. It can be that simple.” Also always pause at the bottom for an effective isometric hold. This will work your muscles to the max! Oh and another thing is we actually move both eccentrically and concentrically in reality.

That said, holding a pose for longer is a lot more difficult. That’s why slowing down the eccentric phases of your workout can be a great way to maximize your strength moves. It’s also okay to drop a weight class if need be. Fetter’s believes “you’ll get more out of lowering 15-pound dumbbells slowly than you will by letting 20-pound dumbbells drop with each rep.”

However, this isn’t the only way to train eccentrically. You can also have a lot of fun doing exercises that are 100% eccentric. How do you do that? Well, going back to Fetter’s squat example, you have to lower into one and then not come back up again. She says “holding a kettlebell in between your legs and just releasing it onto the floor when you get to the bottom of the move,” is an effective way to do this. She says “I don’t do this a lot, but it can be fun when you want to mix things up or are just having a fun “play day” in the weight room. I like to give myself one training-plan-free day per week to experiment and check out new things in the gym.” Fetter’s says one-legged pistol squats are also great, where you lower your butt onto a box or bench.

It’s important to remind yourself that your body is stronger eccentrically than it is concentrically. So, as Fetter’s states, even if you cannot do a full single-leg pistol squat yet, you may be able to do eccentric ones with a surprisingly good form. Over time, you’ll get stronger and be able to do both.

It’s entirely up to how you incorporate eccentric training into your workout routine. However, because this form of exercise increases DOMS and muscle damage you need a proper recovery method. Fetter’s suggests doing fewer reps, sets, or exercises per workout. Or try giving yourself an extra active recovery day between big lifts.

So eccentric training might require you to let go of your ego slightly.

But trust me, when you do you won’t go back.

Eccentric Training Is The Tweak Your Workout Needs