Vegan versus omnivore.  Which is healthier?  It’s a debate that doesn’t seem as if it’s going to die down any time soon. Moreover, those hopping onto the Veganuary bandwagon are more than halfway through now. It seems that when people hear ‘vegan’ they jump on it because it must be greener, surely? Going vegan is huge. But is it really as simple as animal foods being bad and plant foods being good?

This is not likely. You see just because it’s vegan doesn’t mean it’s been produced in an environmentally friendly way. Just like meat, vegan alternatives might be just as detrimental to our planet depending on how they’re produced. All those disputing over vegan versus omnivores, stop wasting your time and take a look at the bigger picture. Let’s not forget about the consequences of ‘greener’ plant-based manufacturers.

The vegan versus omnivore debate has led to all kinds of exciting new launches by restaurants and supermarkets. From grass-fed beef to dairy-free alternatives including cheese, milk and ice cream. There are all kinds of ‘greener’ meat alternatives ranging from Quorn or soy mince and chicken style pieces to ‘next generation’ meat imitating burgers and steaks. But are these greener options for the environment? That’s the debate we should be having when it comes to a vegan versus omnivore debate. If you’re making everything by hand from scratch, you’re doing okay. But it’s when we find ourselves constantly buying the heavily processed and mass-produced vegan or vegetarian options that the problem creeps in.

Maybe it’s best to stick to home-cooked lentils and chickpeas. There’s no doubt that choosing a healthy and environmentally aware diet is a problem for us all nowadays. We all have the best intentions but come out feeling completely confused. So what’s it going to be?

Plant-based chicken pieces that come from a factory in Holland? Or a leg of grass-fed British lamb?

What’s greener or healthier for the planet and your health? 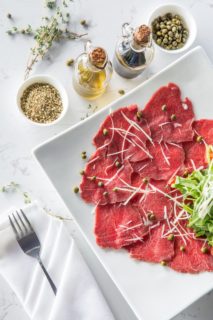 That’s a very good question. Right now, we think it’s safe to say it’s not one or the other. We probably need to eat more plants and then a mindful and moderate consumption of animal products. But more importantly, you need to ask yourself where the ingredients for these products come from. It’s also important to consider how these locally produced, ‘plant-based’ foods are going to meet your nutritional requirements. So it’s not only a question of how these foods will impact your health but how they’re going to affect the planet.

There’s a lot to think about before you do your shopping. Would the planet benefit from people taking up a home-grown omnivorous diet? Maybe. It is a bit overwhelming, but vegan diets are not the be-all and end-all. Maybe Veganuary hit home for you. You decided to buy some artificial, factory meat instead of the real thing. You assume that because no animals were harmed to make it, it’s healthy and greener. Bear in mind that the only person who knows what’s truly in the food is the food technologist themselves. Some of those ingredients are highly toxic for the planet.

Just because your food item is vegan doesn’t mean it’s greener or healthier than its omnivorous counterpart.

Watch Out For Vegan Fast Food And Alternatives

Many companies who claim that they’re healthier and greener than others are embracing this Vegan trend. Especially in fast food outlets. The only issue is that we’re starting to see fast-food as okay once again because they’re launching all these ‘greener’ and healthier plant-based options. Not exactly the point is it?

McDonald’s with its vegan veggie dip and KFC with its’zero chicken vegan burger.’ All of which contain ingredients that we don’t even know how to pronounce. Once again, we’re resorting to fast food…

Sigh. We thought we had moved on from this when everyone was shunning Big Mac’s and the link to obesity.  The point is that just because it’s ‘pant-based’ does not make your meal healthier nor greener. All because we’ve become so one-sided. Marketers and influencers are constantly juxtaposing food groups and suggesting that it’s this or that. Health, food, and life are not black and white. There’s a misconception that all animal foods are bad and plant foods are good.

Vegan diets aren’t greener than omnivorous, especially if omnivorous groups are making mindful food choices. So it might be time to get some more knowledge into the matter and learn a little more about the characteristics of the food itself. What is going to keep us healthy and our planet safe? Whether it comes from plants or animals is beside the point. Concentrate on how your food is being produced and where. Sure, there are factories and farms that produce animal foods which harm the environment. But have you acknowledged the damage caused by plant-based alternatives?

Not every animal product is damaging to the planet. Focusing on organic and grass-fed meat products could do us a world of good. There’s a massive difference between a fast-food meat sausage and one that comes from a reputable brand. These brands only use free-range farming using the sun’s energy, on land that could often serve no other agricultural purpose. So, although you’re eating meat – you’re still thinking greener than some vegan alternatives. Mind-boggling, right?

Even Your Almond Milk Isn’t Greener 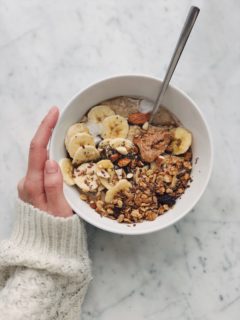 It’s that serious. We’re not cracking jokes when we say you need to be extra mindful about your food choices. If you thought your almond over cow’s milk preference was greener and healthier, think again too. Most of these almonds are farmed in California where farmers use a chemical containing insecticide and fungicides that kill off millions of honeybees every year.  So maybe cow’s milk is the more responsible choice after all?

In fact, free-range livestock according to the Guardian, help fertilise the soil and the pastures they graze on soak up surplus water and preventing soil erosion. There’s a profound difference between this and the usual indoor methods that contribute to deforestation and water pollution. It’s livestock manure that builds soil fertility, fossil fuel-derived pesticides and fertilisers sprayed on the intensively grown plant. Without fertile soil, vegans and omnivores alike go hungry. ‘As livestock producers put it: it’s not the cow, but the how.’

Documentaries on Netflix and the BBC, like ‘The Gamecchangers do make it tricky for us to distinguish what is best.  Our minds are overloaded with fears that we’re going to die and destroy our planet by constantly fixating on the worst-case scenario. It’s no wonder we’re still making poor choices that aren’t any greener than previous endeavours. We’re not saying that you’re wrong for trying to be more mindful, but it’s evident that the majority are not educated enough on food production. It’s no wonder we’re under the perception that all livestock production is produced equally. Note that not all meat, eggs and dairy products come from factory farming. Reportedly, 52% of the eggs you buy in the UK, for example, are free-range.

Enough with the black and white labels. Enjoy food in its entirety equally and try to move towards food that’s been produced sustainably. Vegan or omnivore, both kinds of foods can be produced poorly. For example, wholemeal bread seems like a healthy option for lunch but not with all the carcinogenic chemicals it’s loaded with. Watch out for the kinds of bread you’re eating. 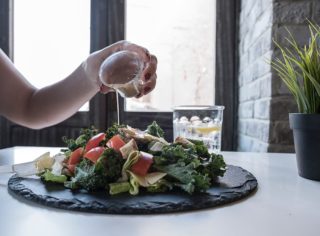 It even goes as far as the avocado you’re mashing up on your toast in the mornings.  They’re packed with nutrients and deliciously healthy, but they’re not always the greener choice. Having an animal product like eggs or black pudding might be the wiser choice at the end of the day. You might think twice after discovering that the Mexican avocado trade is controlled by drug cartels, which are the reason behind Mexico losing its forests.

Therefore, there’s no point in putting animal foods into the bad box. Nor is it smart to praise plant foods. Especially if their production is even more harmful to our planet. Don’t be fooled by big new companies presenting products with the letter ‘V’ on it because they’re not necessarily any greener. In fact, watch out for the word plant, since it too might be encouraging mass-production and food processing.

Health habit number one this year is to eat more soup. This is a simple and satiating way to consume important nutrients or vegetables in a quick and digestible way. Find out more here.

Veganuary is huge. But is it really as simple as animal foods bad, plant foods good? The Guardian. https://www.theguardian.com/commentisfree/2020/jan/22/veganuary-animal-foods-plant-vegan

You Did Veganuary for the Environment, but Does your Food Fly Further? Euro News. https://www.euronews.com/living/2020/01/17/you-did-veganuary-for-the-environment-but-does-your-food-fly-further

It’s Boomtime for Veganuary as Retailers Rush to Join the Trend. The Guardian. https://www.theguardian.com/lifeandstyle/2019/dec/22/vegan-boom-veganuary-retailers-on-trend

Soy Foods: Are They Good Or Bad For Your Health?

11 Healthy Things That Happen When You Stop Eating Red Meat

Is it a ‘GO’ for avocados and gut health?

Skye is a Personal Well-Being Coach, Thought Leader, Entrepreneur, and Movement Instructor. She loves changing people's lives and believes you should always strive to be your best, irrespective of the circumstances! She's the proud founder of the brand and online Wellbeing business, Skyezee FashionFit pty (LTD). She is also the co-studio owner of Bodytec Rivonia Village.

Living your longest, happiest, healthiest, BOLDEST lifestyle, and learning how to truly take care of your body and mind, holistically, is her specialty. More importantly, to help you stay consistent so that you are successful at whatever you aim to achieve. Particularly, those who’ve been misled by fad diets, false marketing, fitness images, and unrealistic beauty standards. Skye's here to help!

She's a qualified Fashion Journalist, Stylist, and Trends Forecaster. A Health and Fitness journalist for wellness magazine, Longevity. A Yoga Teacher and Health Life Coach in training. She's experienced in Exercise and Jump Rope Coaching, Movement, Mindfulness, and Nutrition. Her mission is to help others achieve their goals daily, with confidence. Nothing makes Skye feel more alive than being on top of her health, because your greatest confidence-builder begins within. She's an adventure-seeking lady who has taken bold leaps of faith and risks in a short space of time. This has led her to face many challenging experiences at a young age, so she knows what it’s like to feel ‘stuck.’ But she also knows that defining your ‘ONE QUESTION’ is the most powerful asset to establishing true grit and determination, so you can conquer anything you wish to achieve.

She will help you get your BOLDEST self and LIFE back!

Claim your FREE Guide to Achieving your Boldest Self here --> https://skyezeefashionfit.com/why-need-one-question-persevere/

Become One of the FIrst-Ever Boldest-Self Ladies in her BRAND NEW club. To learn more look here --> https://skyezeefashionfit.com/become-a-founding-member/

Skye's mission in this one-of-a-kind ladies club is to help and inspire EVERY women around the world to reach their best, most satisfied, confident, healthiest, happiest, and BOLDEST Self!

She says, "Together we will strive to figure out our ONE QUESTION to master EXCELLENCE in all that we DESIRE in living our BOLDEST life."

She's always excited to hear about who you are and what your story is or to just have a casual chat. So, come and say hi by sending her a friendly message via skye@skyezeefashionfit.com or connect on Social Media.