KFC Vegan chicken burgers seem to be what everybody craves from the menu. KFC, the Atlanta fried chicken franchise, was the first to hop onto a plant-based train. They recently released their vegan fried ‘chicken’ burger recently and they were sold out within a matter of hours. It just shows you that this is what people today want.

Although we still need to be aware of our meat-alternative food choices. It is a wonderful thing that more fast-food franchises are looking into creating new products for people who enjoy their take-out but still want to reduce their meat consumption. And we know how much people love KFC fried chicken. That’s a winning formula for sure.

More importantly, KFC announced on Monday that is the first national fast-food chain to introduce a plant-based chicken in partnership with El Segundo, California-based Beyond Meat.

KFC Vegan Chicken Burgers Up For The Test

Before all the plant-based eaters get excited. Don’t go running to your nearest KFC for new KFC vegan chicken burgers just yet. KFC reports that it is still in the testing phase. The franchise wants to test the new Beyond Fried Chicken at properly before launching it as a set item on their menu. They got pretty creative with their Beyond Chicken too. In fact, the meat alternative is available in nuggets or boneless wings tossed in one of three sauce options: Nashville Hot, Buffalo or Honey BBQ. 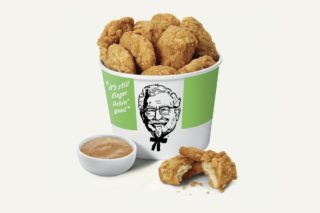 However, the company needs to be certain that there will be the same demand for these KFC vegan chicken burgers elsewhere too. But considering the lines and cars that wrapped around the Atlanta branch, things are looking pretty good. The best part about this new product is that you won’t be contributing to any form of animal cruelty and harming more chickens.

KFC says that the plant-based chicken sold out in less than five hours and that the store sold as much plant-based chicken in those five frantic hours as their usual popcorn chicken sales for a full week. I think KFC is certainly onto something. This is a massive step in the right direction for the franchise and sends out a decent message to others to do the same. Surely, after this more fast-food chains will follow in KFC’s footsteps? The scary thing about your fried chicken is that nearly 50 billion chickens are required to produce it. These chickens aren’t raised in decent facilities either. They’re raised by the thousands in factory farms in the US every year.

What Does KFC Vegan Chicken Burgers Mean For The World?

It means that we’re making headway to help make the world a more sustainable environment. But we’re doing it without shutting down entire businesses and livelihoods. That’s how to live and work smart if you ask me.

Ethan Brown, the founder and CEO of Beyond Meat, said in a press release announcing the deal that KFC is an iconic part of American culture. Moreover, it is a brand that most of us grew up with. KFC is more of a childhood memory than anything else. We can’t shut that down. That’s why Ethan says he is happy to be able to bring Beyond Fried Chicken, in all of its KFC-inspired deliciousness, to market. 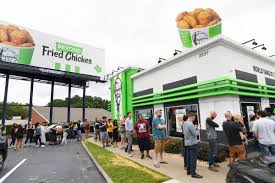 Today we need to start meeting halfway if we want to create a happy and sustainable planet. He says that both Beyond Meat and KFC have the amazing ability to meet the consumer where they are, as a team. It’s fantastic to way help consumers move forward on their journey to a more plant-based diet. The CEO says his only regret is not being able to see the legendary Colonel himself enjoy this important moment. Well, we think he’d certainly be very proud!

There’s no doubt that every year shoppers are choosing veggie options more and more. That’s a fact and businesses in the food industry can’t ignore that. Especially if they want to still make money at the end of the day. Not sure what Beyond Meat is?

Well, it’s a very innovative company that started in 2009. Beyond Meats produces plant-based products that imitate the taste, texture, and nutrient profile of meat without killing any animals. At first, KFC vegan chicken burgers or meat sounds weird, but it’s genius. Earlier this year, the company went public. Guess what happened? The products were guzzled up because loads of restaurants signed plant-based meat deals. 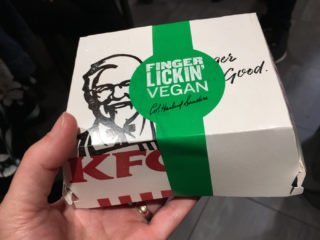 Beyond Meats is only going to get bigger. KFC vegan chicken burgers aren’t where they end. They’ve got deals with Del Taco, Carl’s Jr., Subway, and the national food distributor Aramark. Plus many other restaurants and grocery stores in the US. KFC vegan chicken burgers and meat alternatives are starting to take over. Even Beyond Meat’s main competitor, Impossible Foods is teaming up with other food franchises. These include Qdoba, Burger King, and the national distributor Sodexo, among others.

It’s interesting that Beyond Meat just launched vegan chicken burgers. Their primary focus has only been on imitating beef. There is a good reason for this though. Statistics state that cows are huge contributors to global warming. Therefore, there are massive sustainability gains from replacing them with plant-based products.

We shouldn’t forget about the chicken industry either and we’ve got a reason to try to reduce the production of chicken. Why? Because a cow is very large and can be turned into a lot of burgers. However, chickens are much smaller, so we need to kill loads more chickens than cows to get the same amount of meat. Chickens are also treated the worst out of any other farm animal. They’re caged in small, chemical-treated spaces with lots of diseases and engineered to grow so quickly that their legs give out. This is the sad truth. 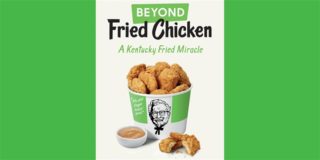 VOX says that chicken farming also contributes to public health problems like antibiotic resistance and the spread of bird flu. Not to mention the high carbon footprint that chicken factories have on our environment. This is why animal welfare researchers have urged plant-based meat companies to figure out a substitute for chicken and other farmed chicken products like eggs. That’s why the partnership between Beyond Meats and KFC – one of the largest fast-food franchises in the world – is so important!

This is revolutionary for the entire food industry and we think it’s going to have a massive impact on all the other fast-food chains too. It’s only a matter of time. Having said that, you still need to be mindful about KFC vegan chicken burgers or any plant-based fast-food because it’s still fast food and not necessarily healthy for you. It’s simply a more conscious and sustainable option.

Want to know about food trends?

More people are choosing trendy almond milk or other substitutes instead. But is this a good thing?